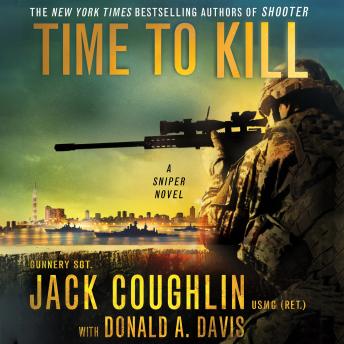 Time to Kill: A Sniper Novel

In Jack Coughlin and Donald A. Davis' newest thriller in The New York Times bestselling series featuring American sniper Kyle Swanson, the Sphinx, a symbol of Egypt's ancient history and power, is blown up by terrorists. A visit to Cairo by Iran's national soccer team ends in a bloodbath. Egyptian missiles sink an Iranian vessel in the Red Sea. The Muslim Brotherhood is on the march, working behind the scenes to provoke a war between Egypt and its powerful neighbor, Iran-a war that would certainly result in an Iranian victory. What is at stake is nothing less than total control of the Suez Canal through which most of the world's oil flows.

Behind the coup is a sinister double agent called The Pharaoh whose goal is a fanatic Islamic regime on Israel's borders. To avoid a direct military confrontation with Iran, the U.S. turns to master American sniper Kyle Swanson and his team, Trident. Using ruthlessly accurate targeted kills, they go undercover to teach the Iranian leadership a lesson and prevent a war that could strangle the world's oil supply and cause the death of thousands.

Totally awesome. I sometimes start a new series of books just because it is narrated by Luke Daniels. That's how I stumbled across this series. And I am so happy I did. This series of books is so awesome if you like military battles, strategy tactics on the ground, fighting or high strategy and politics.