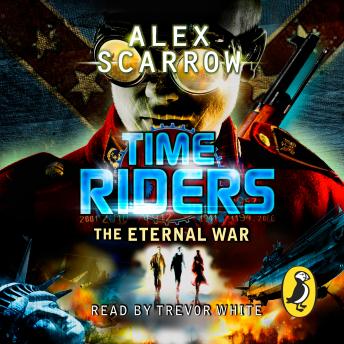 Penguin presents the unabridged, downloadable audiobook edition of TimeRiders: The Eternal War, the fourth book in the TimeRiders series, read by Trevor White.

Liam O'Connor should have died at sea in 1912.
Maddy Carter should have died on a plane in 2010.
Sal Vikram should have died in a fire in 2026.
But all three have been given a second chance - to work for an agency that no one knows exists.
Its purpose: to prevent time travel destroying history . . .

A time wave has struck that alters the entire history of the American Civil War. Abraham Lincoln has followed Liam into the present from 1831 - and now the world is in a dangerous state of limbo . . .
If the TimeRiders can't return Lincoln to the past, the Civil War will never end. Can Maddy persuade two colonels on either side of no man's land to cease fire long enough to save the future?