To Be a Friend Is Fatal: The Fight to Save the Iraqis America Left Behind 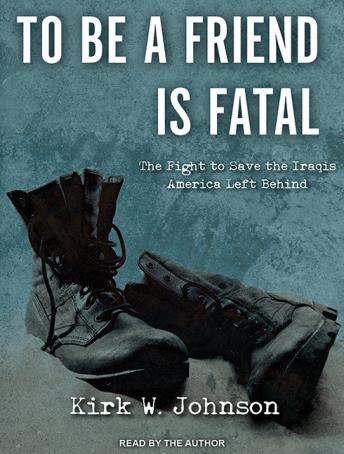 In January 2005 Kirk Johnson, then twenty-four, arrived in Baghdad as USAID's only American employee who spoke Arabic. Despite his opposition to the war, Johnson felt called to civic duty and wanted to help rebuild Iraq.

Appointed as USAID's first reconstruction coordinator in Fallujah, he traversed the city's IED-strewn streets, working alongside idealistic Iraqi translators-young men and women sick of Saddam, filled with Hollywood slang, and enchanted by the idea of a peaceful, democratic Iraq. It was not to be. As sectarian violence escalated, Iraqis employed by the U.S. coalition found themselves subject to a campaign of kidnapping, torture, and death.

On his first brief vacation, Johnson, swept into what doctors later described as a 'fugue state,' crawled onto the ledge outside his hotel window and plunged. He would spend the next year in an abyss of depression, surgery, and PTSD-crushed by having failed in Iraq.

One day, Johnson received an email from an Iraqi friend, Yaghdan: People are trying to kill me and I need your help. After being identified by a militiaman, Yaghdan had emerged from his house to find the severed head of a dog and a death threat. That email launched Johnson's mission to get help from the U.S. government for Yaghdan and thousands like him abandoned in Iraq. The List Project has now helped more than 1,500 Iraqis find refuge in America. To Be a Friend Is Fatal is Kirk W. Johnson's unforgettable portrait of the human rubble of war and a book that 'redeems a measure of pride from a national episode full of tragedy and shame' (George Packer).

To Be a Friend Is Fatal: The Fight to Save the Iraqis America Left Behind