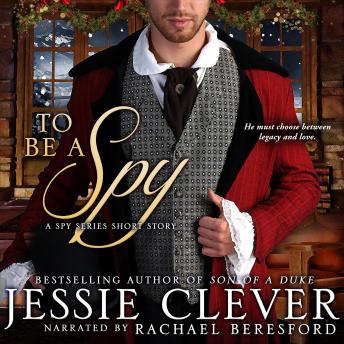 To Be a Spy

Samuel Black must make a decision: to be a spy like his father or follow his heart. Either is likely to give his mother chest pains.

For Samuel is no longer a lad with the noble wish of being a lamplighter to keep the seedy streets of London safe. About to embark on university, his mind stirs with the thoughts of creating a policing force in London to safeguard its citizens. Daunted by his family’s legacy as spies, Samuel fears making his ideas known.

But when he stops a would-be purse-snatcher, his path unexpectedly veers into that of one Miss Penelope Paiget, and suddenly, Samuel must make a choice.

To Be a Spy is the first in the fast-paced, thrilling historical romance Spy Series Short Stories and picks up where the gripping, historical romance Spy Series concluded. If you love heart-stopping romance, spellbinding intrigue, and unexpected danger, don’t miss this captivating short story series from bestselling author Jessie Clever. Unlock romance and adventure when you pick up your copy of To Be a Spy today.

To Be a Spy