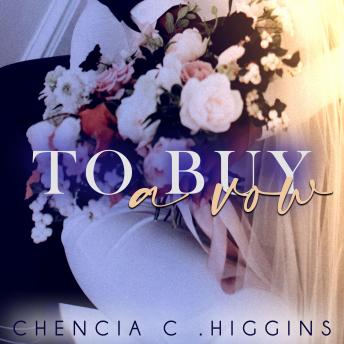 To Buy a Vow

What if we could buy a vow to right our wrongs?

For Nedra Phillips, the strain of portraying a strong Black woman to outsiders is finally taking its toll on her. Her marriage to her college sweetheart has begun to fizzle out, with conversations dwindling down to nothing and intimacy becoming sporadic at best. Unwilling to endure the stigma of being a 30-something divorcee, she does everything in her power to hold onto her marriage, but Chris isn't just on a different page, he's in a whole other book entirely. Despite their disconnect, her vows meant something to her and marriage is supposed to be forever. When all seems lost, she makes a last-ditch effort in hopes of generating results, but what exactly does a Hail Mary look like between friends and lovers?

Jermaine Hawkins is nearing the end of a prominent career playing professional basketball and is ready to put his retirement plan into action. That plan includes many things but most important on the list is putting an end to his status as a hermit and starting a family. A chance encounter with a firecracker of a woman makes him think he's found his capital F. But whether that F is for 'future' or 'frustrating' is to be determined. Can Jermaine convince Nedra that everything happens for a reason while also getting her to give him a chance at something real?

To Buy a Vow