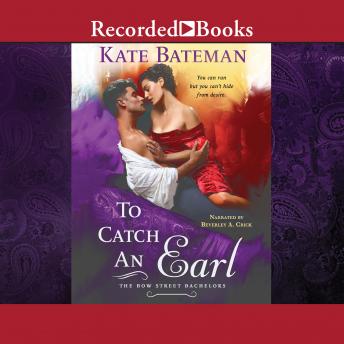 To Catch an Earl

Working undercover for London's police force, the Bow Street Bachelors serve to protect its citizens--even while they're falling for the city's most alluring women ... She knows how to steal a kiss. Alex Harland, Earl of Melton, never pictured himself as an agent of inquiry. But the thrill of investigation is a challenge he now embraces. When he's asked to pursue the Nightjar, a thief notorious for reclaiming France's crown jewels, he crosses paths with the beautiful yet elusive Emmy Danvers. Their game of cat and mouse sparks a memory of the one puzzle he's never solved: the identity of the woman who stole a kiss--and left him wanting so much more ... Will he surrender his heart? Emmy knows how to keep her secrets hidden--and, as the infamous Nightjar, her love for Alex Harland is one of them. With the earl hot on her trail--and making her hot under the collar--Emmy has no choice but to keep her distance. But when danger threatens Emmy's life as well as her reputation, will Alex finally discover that he's followed every clue ... to true love?

To Catch an Earl