To Quell the Korengal 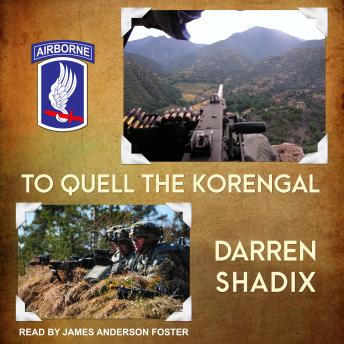 In 2007, the U.S. Army's 173rd Airborne Brigade posted to northeastern Afghanistan's Kunar Province. Battle Company, the best within the Brigade, was assigned the toughest Area of Operations. It was called the Korengal Valley. During their fifteen-month tour, Battle Company saw more combat than any unit since Vietnam.

Raw and unapologetic, To Quell The Korengal is a first-hand account of life on the front lines. Written by a grunt on the ground, it is rife with gun fights, grueling foot patrols, a villainous company commander, the austere routines of the American soldier, and the kind of humor only found in war.

Though equally appealing to combat-hardened listeners, the story is told in a manner any civilian can comprehend. It was the author's wish that the book could serve as a bridge of understanding for a veteran's wife or mom, or anyone curious about the conflict and sacrifices of our nation's troops.

To Quell the Korengal