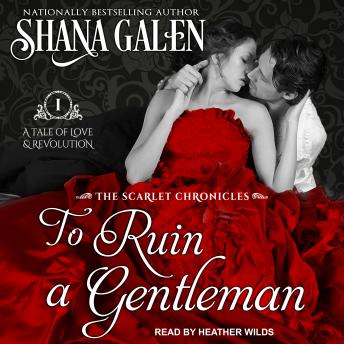 To Ruin A Gentleman

Angelette, the recently widowed Comtesse d'Avignon, only invited Viscount Daventry to her country house party as a favor to her sister. When the handsome British lord arrives-two days late-he's full of unnerving tales of unrest and violence in Paris. Angelette assumes it's all exaggeration . . . until her chateau is attacked and her life threatened. Daventry rescues her, and the two are forced to run for their lives. But when danger closes in, will the viscount stand at her side or save himself?

Hugh Daventry visits France frequently to import wine for the family business. On his way out of the country, he stops at the comtesse's house party out of obligation. But after meeting the raven-haired beauty, he tries to persuade her to leave France with him. When the peasants attack, he realizes he's already too late, and now he must protect Angelette, whose sharp tongue is far from angelic. Too soon the couple is caught up in the rising revolution, dodging bloodthirsty mobs, hiding from soldiers, and embroiled in the attack of the Bastille. Hugh wants nothing but to leave tumultuous France for the calm of England. He knows Angelette is intelligent and resourceful-a survivor. But can Hugh survive without her?

To Ruin A Gentleman