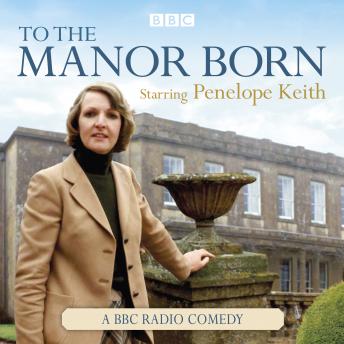 When her husband's death leaves her financially strapped, Audrey fforbes-Hamilton has no choice but to sell her beloved Grantleigh Estate. With butler Brabinger in tow, she decamps to the tiny Old Lodge cottage, where she keeps a close - and disapproving - eye on the new squire: the nouveau riche Richard DeVere, a wholesale food magnate of Czech descent.

In these ten episodes, Audrey attempts to educate the usurper in the ways of the Lord of the Manor - but as she tries to put DeVere in his place, she discovers he's no pushover... Will it be happy ever after for the indomitable aristocrat and the dashing self-made millionaire?

This classic comedy was originally intended for radio, but was transferred to TV instead where it ran for three highly successful series between 1979 and 1981, attracting almost 25 million viewers for its final episode. The show finally returned home to Radio 2 in 1997, adapted by Peter Spence from his own TV scripts. Penelope Keith and Angela Thorne reprise their starring roles as Audrey fforbes-Hamilton and Marjory Frobisher, with Keith Barron as Richard DeVere.