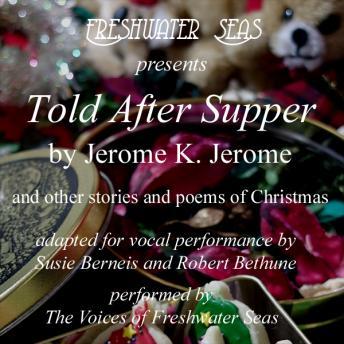 A few selected Christmas poems and stories rounds out the program, including the classic story of the Nativity from the Bible.

This is a wonderful spoof of the grand old English tradition of telling ghost stories at Christmas--a tradition Charles Dickens made fine use of in A Christmas Carol and other stories. Only in Jerome's work, everything goes hilariously wrong, and the narrator of the story even winds up wandering around on the streets drunk as a lord, somewhat incompletely dressed!

In this early poem, we hear Frost's dry, matter-of-fact New England voice making "a simple calculation" about "Christmas trees I didn't know I had."

A dreamlike experience of a gentle touch from a special person late in the night on Christmas is as fine a piece of dreamland as one could wish.

"Ring Out!", by Alfred Lord Tennyson:

A passionate appeal that the new year may be better than the old.

The majesty and indeed the worldly wisdom of the three who came to give great gifts to the infant in the manger has never been better expressed.

In the beautiful language of the King James Bible--the only successful contribution to literature ever made by a committee--we hear not only how a babe was born, but how his mother came to believe great things of him.

This title is due for release on December 20, 2007
We'll send you an email as soon as it is available!