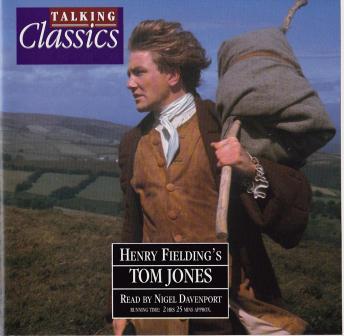 Henry Fielding's great novel is a masterpiece of the picaresque. It has a lovable rogue for a hero, whose all too recognisable human faults involve him in many a scrape. The story bounds along from the opening scene in which an unknown baby is discovered in Allworthy's bed, through all Tom's trials and tribulations. But the novel's exuberant tone never lets the reader fear that's its erring hero will come to any real harm, despite the machinations of the devious Blifils, who so nearly come between Tom and his true birthright. All comes right in the end, as Tom win the hands of his beloved Sophia, whose common-sense and virtue match her beauty.

1. BIRTH AND MARRIAGE. Returning to his home in Somerset after an absence of several months, the wealthy Mr Allworthy, a kindly man, decides to bring the child up himself. Inquiries suggest that Jenny Jones, a maidservant, is the child's mother: Allworthy forgives her and send her away to make a fresh start. His sister Bridget accepts a proposal of marriage of Captain Blifil, brother of a local doctor. She bears a son, who becomes heir to Allworth's estate.

2. LOVE AND FISTICUFFS. Tom grows up riotous but good-willed, unlike young Blifil, a smooth-tongued schemer. Tom falls in love with the beautiful Sophia, daughter of their neighbour Squire Western. When Sophia falls from her horse, Tom catches her and breaks his arm - and Sophia returns his love. Allworthy falls ill but, despite the news of his sister's death, soon recovers. Tom celebrates by getting drunk and Blifil starts a quarrel. Tom leaves the house in order to cool down, dreaming of Sophia. But he is seduced by Molly Seagrim, in whose arms his discovered by Blifil and his tutor, Thwackum. A fight breaks out; Western comes across them and joins in to help Tom. Sophia arrives shortly afterwards and faints with shock.

3. A MERCENARY UNION. Sophia's aunt, Mrs Western, tells the Squire that she believes her to be in love with Blifil. Both are pleased by such an advantageous match. When Mrs Western tells Sophia that she has guessed her true love, the girl admits that she loves Tom. Mrs Western is horrified and forces her to accept Blifil as a suitor. Blifil then makes a laughable attempt to woo Sophia - he feels nothing for her, but finds her father's wealth more than attractive.

4. DECEIT TRIUMPHS. Sophia pleads with her father, asking him not to marry her to Blifil; Western is enraged. Tom daringly requests to be allowed to reason with her, so that he can see her alone. While they declare their love for each other, Mrs Western tells the Squire the truth. He then surprises the lovers in one another's arm and throws Tom out. On hearing this, Blifil tells Allworthy a slanderously slanted version of Tom's behaviour on the evening of the fight. Allworthy is deeply upset; he summons Tom and banishes him. Distressed at losing Sophia, Tom sets out for Bristol, planning to go to sea.

5. A NIGHT ILL SPENT. Sophia flees with her maid Honour, to escape her imminent marriage. Tom, meanwhile, is attended by a barber; on hearing his story, the barber explains that he is Partridge, wrongly thought to be Tom's father. Tom rescues an older woman, Mrs Waters, from an attack. They go to an inn and she invites him into her bed, where they are disturbed by a stranger named Fitzpatrick, who thinks she is his wife, Sophia arrives at the same inn and her maid learns of Tom's infidelity. Shattered, Sophia leaves a note for Tom and goes on her way.

6. MISADVENTURES. Tom is aghast to find Sophia's note; after berating Partridges, he sets off in pursuit of her. Sophia encounters an old friend, Mrs Fitzpatrick, who has run away from her husband, and together they travel to London. There Sophia stays with her relative Lady Bellaston, until her hostess learns about her love for Tom. She then writes to Squire Western, who wrathfully drags Sophia away with him. Tom, meanwhile, keeps missing his beloved by a whisker.

7. DUELLING AND DESPAIR. Allworthy and Blifil follow the others to London, where Blifil continues his suit with Western's blessing, although Allworthy will not consent to the marriage unless Sophia is willing. Hoping for news of his beloved, Tom calls on Mrs Fitzpatrick. Instead he encounters Mr Fitzpatrick, who challenges him to a duel. Tom wounds Fitzpatrick and is arrested. The next day, Mrs Walters, who has taken up with Fitzpatrick, visits Tom with the news that Fitzpatrick is out of danger. On her departure, Partridges declares Mrs Walters to be Tom's mother; Tom is in despair at having committed incest. Partridge repeats his tale to Allworthy, who is equally appalled.

8. ALL IS CLEAR. Mrs Waters calls on Allworthy and reveals that Tom's mother was in fact Bridget and that she believes Allworthy is prosecuting Tom. Allworthy's steward, Dowling, admits that he has been acting for Blifil and revels that Blifil received a letter, intended for Allworthy, which his mother wrote on her deathbed confessing all, Allworthy realises that Tom has long been the victim of Blifil's schemes.

Tom is released from prison and reunited with Sophia; Western has no objection to the match now that Tom is Allworthy's heir. Tom promises to mend his dissolute ways and wins Sophia's hand at last.