Tomb of the Golden Bird 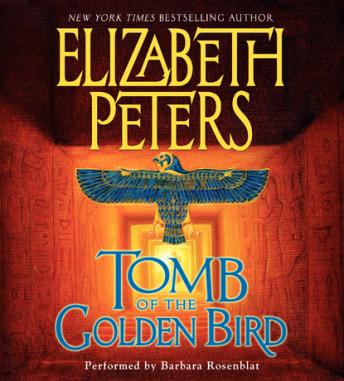 In New York Times bestselling author Elizabeth Peters's eagerly anticipated Amelia Peabody adventure, the Emerson clan is a hairsbreadth away from unearthing the legendary site they've been searching for. But a sinister plot and a dark family secret stand in the way of their ultimate ambition -- and threaten to change things forever. . . .

Convinced that the tomb of the little-known king Tutankhamon lies somewhere in the Valley of the Kings, Egyptologist Radcliffe Emerson and his wife, Amelia Peabody, seem to have hit a wall. Emerson has tried desperately to persuade Lord Carnarvon and Howard Carter to relinquish their digging rights. But Emerson's trickery has backfired, and his insistent interest in the site has made his rivals all the more determined to keep the Emerson clan away.

The family returns to Luxor and watches from the sidelines as Carter and Carnarvon 'discover' King Tut's tomb. But before their own excavation can get underway, Emerson and his son, Ramses, find themselves lured into a trap by a strange group of villains demanding 'Where is he?' The Emersons embark on a quest to uncover who 'he' is and why 'he' must be found, only to discover the answer is uncomfortably close to home. Now Amelia must find a way to protect her family -- and perhaps even her would-be nemesis -- from the forces that will stop at nothing to succeed in the nefarious plot that threatens the peace of the entire region.

Filled with heart-stopping suspense, and Amelia Peabody's trademark wit and wisdom, Tomb of the Golden Bird is the latest thrilling installment from the beloved 'Grand Dame of historical mystery' (Washington Post).

Tomb of the Golden Bird

This title is due for release on March 28, 2006
We'll send you an email as soon as it is available!