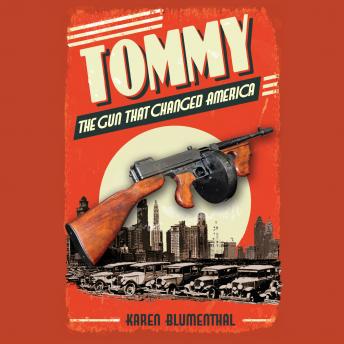 Tommy: The Gun That Changed America

The fascinating and topical nonfiction story of how one gun changed American courtrooms, streets, and homes, told for a YA audience by award-winning author Karen Blumenthal

John Taliaferro Thompson had a mission: to develop a lightweight, fast-firing weapon that would help Americans win on the battlefield. His Thompson submachine gun could deliver a hundred bullets in a matter of seconds―but didn't find a market in the U.S. military. Instead, the Tommy gun became the weapon of choice for a generation of bootleggers and bank-robbing outlaws, and became a deadly American icon. Following a bloody decade―and eighty years before the mass shootings of our own time―Congress moved to take this weapon off the streets, igniting a national debate about gun control.

Critically-acclaimed author Karen Blumenthal, author of Bootleg: Murder, Moonshine, and the Lawless Years of Prohibition, Hillary Rodham Clinton: A Woman Living History, and Six Days in October: The Stock Market Crash of 1929, reveals the fascinating story of this famous and deadly weapon―of the lives it changed, the debate it sparked, and the unprecedented response it inspired in Tommy: The Gun That Changed America.

Praise for Tommy: The Gun that Changed America:

“Blumenthal’s fascinating biography of the weapon is most dramatic in its chapters on the famous gangsters. . . . A gripping look at guns, gangsters, and finding the ‘right balance between individual freedoms and community safety.'” ―Kirkus Reviews, starred review