Too Good To Be True: A humorous dystopian sci fi story 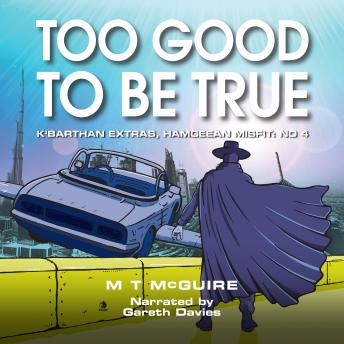 When trouble comes knocking, meet the one man dumb enough to answer the door.

When The Pan of Hamgee encounters some mudlarkers trying to land a box on the banks of the River Dang he is happy to help. Having accepted a share of the contents as a reward he cannot believe his luck. It contains one of the most expensive delicacies available in K’Barth, Goojan spiced sausage. If he can sell it, the sausage might spell the end of his troubles. On the other hand, knowing his luck, it could bring a whole load more.

Probably the only book you'll hear with a gripping 11 mph barge chase.

Q – What made you write this series?

A – If you want the honest answer I wrote it for me. I love British satire and humor (or humour). I love wit; funny epic fantasy series like the Discworld novels and comedic sci fi like Douglas Adams. I like a gripping tale that zips along quickly. And of course, I like genre fiction mashups; Douglas Adams meets StarTrek and James Bond - with a smidge of Dr Who and a dash of romance (but no squelchy bits). I wanted a fast paced story, a gripping tale but at the same time a funny one. Comedy in the tradition of all the great humorous British authors. I wanted protagonists people could love and empathise with, mavericks, misfit characters, real people ... except they're not all people obviously, some of them are other alien (ish) species. The Hamgeean Misfit series is science fiction fantasy action - it's planet based, so it's a bit of a blend. You'll find all sorts of quirky characters and interesting alien species: from 6ft Swamp Things with antennae to cute furry creatures like the Blurpons with their fluffy ears, big button eyes and penchant for extreme violence.

Oh ... and did I mention the flying car chases?

Too Good To Be True: A humorous dystopian sci fi story

This title is due for release on June 4, 2021
We'll send you an email as soon as it is available!