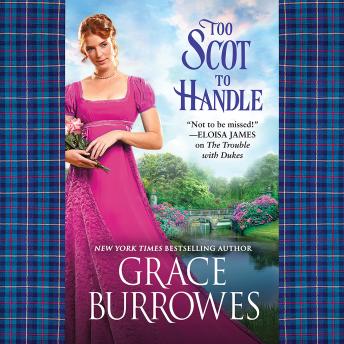 Too Scot to Handle

Don't miss this 'well-plotted, beautifully written story' (Library Journal, starred review) about a sexy Scot and the woman who finally captures his heart in the New York Times bestselling Windham Brides series.
As a captain in the army, Colin MacHugh led men, fixed what was broken, and fought hard. Now that he's a titled gentleman, he's still fighting -- this time to keep his bachelorhood safe from all the marriage-minded debutantes. Then he meets the intriguing Miss Anwen Windham, whose demure nature masks a bonfire waiting to roar to life. When she asks for his help to raise money for the local orphanage, he's happy to oblige.
Anwen is amazed at how quickly Lord Colin takes in hand a pack of rambunctious orphan boys. Amazed at how he actually listens to her ideas. Amazed at the thrill she gets from the rumble of his Scottish burr and the heat of his touch. But not everyone enjoys the success of an upstart. And Colin has enemies who will stop at nothing to ruin him and anybody he holds dear.
'Sexy heroes, strong heroines, intelligent plots, enchanting love stories...Grace Burrowes's romances have them all.' --Mary Balogh, New York Times bestselling author
'Grace Burrowes is a romance treasure.' --Tessa Dare, New York Times bestselling author
The Windham Brides series: The Trouble with Dukes Too Scot to Handle No Other Duke Will DoA Rogue of Her Own

Too Scot to Handle