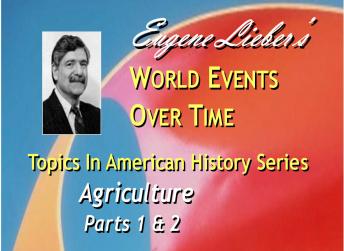 America is agricultural until well into the 20th century. . Traditionally conservative, farmers could be aggressive and even violent when their rights are violated. Availability of land attracts land starved Europeans. The frontier pushes further and further west always at the expense of Native Americans who eventually resist. (5.14.00) = Origins of Sectionalism. Ethnic differences in farm communities, but differences especially north and south because of geography and climate. Slave labor conducive to large flat areas of farmland in the south, but not to the small rocky family farms of the north. Crop differences in North and South are subject to the same factors (8.40.00) = Cotton becomes king in the South. Role of invention of the cotton gin in 1790, and the rise of industrialization in England, especially textiles. Its impact on slavery in the South. (11.16.00) = The family farm in the North. Physical labor is hard and precarious. Greater demands on women than men. (12.19.00) = Transportation revolution. The Erie Canal's great importance to Midwest farmers in early 1800s by linking the Midwest to the Northeast markets, instead of just the South via the Mississippi River. Erie Canal becomes a detriment to the South's food supply in the Civil War. (15.38.00) = Impact of the Civil War on farmers. Federal government as a ready market for farm goods. Later repercussions from farmers' mindset of positive connection between prosperity and newly issued greenbacks. Food supply shortage is major problem for the South. (25.09.00) = Impact of end of Civil War. Farmers are favored by the opening new land to small farmers, and expansion of agricultural and mining education. In the South, the ex-slaves and poor whites are given small parcels of land to farm, but become dependent sharecroppers after the protected 12 year Reconstruction Period ends. (25.09.00) = Farming downturn starting in the 1870s. Demobilization shrinks Federal market. Greenbacks are withdrawn. Farmers' mindset now connects hard times with withdrawal of greenbacks (27.27.00) = Farmers and the railroads. Farmers initially greeted coming of the railroads with open arms. Eventually, with the Federal government aid, the railroads became very powerful, as well as greedy, and corrupt, exploiting the farmers and becoming seen as the enemy of the small farmers (32.49.00) = The Granges in the 1870s. Promoting farm life, farm interests. And political activism. Efforts to get legislature to regulate the railroads, and Grange Laws passed, upheld by the Supreme Court in 1877. In 1886 the Supreme Court, now reconstituted, declare the Grange Laws unconstitutional on questionable legal grounds (37.22.00) = Three Farmers' Alliances in the 1880s. The Northern, The Southern, and the Colored. They continue and advance activities of the Granges. The Northern Alliance advocates a purely farmers' alliance. The Southern Alliance struggles to control the now single party, the Democrats. The Colored Alliance go along with the Southern Alliance, but in 1890 the Alliances combine to form a new Agricultural Party.

The Populist Party of the 1890s, a 3rd Party. Its platform includes support of industrial labor, government control of railroads, an end of absentee landlords, coining silver as well as gold to counter inflation, and a series of democratic reforms. (4.25.00) = The election of 1896. William Jennings Bryan, the Democratic candidate from Nebraska, a farm state, and his "Cross of Gold" speech. The Populist Party backs Bryan but the Republican McKinley wins. The Populist Party fades and eventually dies. (11.34.00) = Jim Crow Era begins. With the demise of the Populist Movement, the upper class whites win control of one-party South, and no longer need to vie with the lower class whites for the black vote. "Separate but equal" Supreme Court decision dooms blacks to inferior education in the South. Total segregation of every public facility in the South. A time of terror, including many lynchings. Poverty of sharecroppers continues for the next decade. (15.47.00) = The Legacy of Populism. It was not the regression to the agrarian myth of the noble farmer, nor the socialistic view of the government taking over the railroads. Rather it was an effort to find a way of individualism to fit into the need to organize in an increasing industrialized society. (18.22.00) = Farming at beginning of the 20th century. Progressivism of President Wilson is more structured than the somewhat emotional Populist Movement, and is less sympathetic to small farmers. Farmers experience prosperity during WW I supplying the military, and then sending farm goods to starving Europe after the war. (22.10.00) = Farm depression in the 1920s. A prosperous time in general, the 1920s begin a farm depression. The Army demobilizes. Europe recovers. Markets shrink. Competition from other world markets. Farm prices drop and continue to drop through the 1920s into the 1930s. (24.10.00) = Great Depression of the 1930s. This adds to farmers' already dire situation. The Great Plains Dust Bowl due to lack of rain and misuse of farmland destroys farms, causing a great migration west. In 1900 dire conditions in the South causes migration to northern cities by blacks and whites who are often met with great hostility in the competition for jobs. (29.41.00) = FDR and the New Deal in 1933. Attempts to help farmers. Intentional scarcities to raise prices to farmers. Failure: non-compliance, circumvention, lack of oversight. Sharecroppers not covered, suffer. Law later declared unconstitutional. Concern for the large farmer at the expense to the small farmer. Farmers migrate west or at times resist economic depression during the 1930s. (36.33.00) = New farm prosperity. Coming of WW II and end of drought. Feeding soldiers. Permanent migration to cities for high paying defense jobs, replaced by poor migrant farmers from Mexico living under dire conditions, continuing into the post-war era. Myth of romanticizing farming. (39.15.00) = Post-WW II American agriculture. Some benefit exporting food to war-devastated Europe. Subsidies continue but large farms benefit more than small ones. Future of family farms undermined by children leaving. Competition of large agribusiness. Tragedy of family farms' overwhelming debt burden. Agribusinesses thrive, also compete internationally. Many Mexican small farms cannot survive, forcing migrant workers to the U.S. (44.39.00) = Agriculture attempts to adapt to modernity.. Many approaches, with a mix of successes and failures. Issues will remain for a long time to come