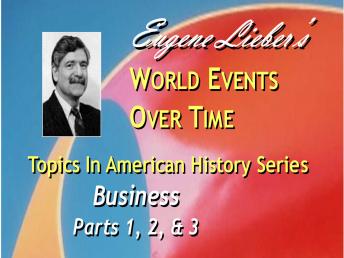 Capitalist ethic is deeply ingrained in America. No pre-capitalist history such as feudalism and socialism, in contrast to Europe. Navigation Acts of the 1600s define the mercantile economic role of the American colonies to England, mainly for the benefit of England. (4.49.00) = 100 years of relative neglect results in illegal trade by colonies, which becomes to norm. Reasons for neglect include problems of enforcement. English government upheavals, English involvement in European wars mainly with France, problems with English governors managing the colonies. (9.08.00 = Merchant capitalism in the North. The English win the French & Indian War of 1756-63. The Colonies benefit. The English now enforce economic laws to help it cover its war debt, and is met by resistance by the Northern merchants who had been trading freely (13.10.00) = Slave capitalism in the South. Some feudal aspects but mainly concerned with markets and profit, although entwined with a number of ideological issues as well Considerable poverty in much of the South for poor whites (16.04.00) = The North and South in early 18th Century. The North begins manufacturing, including mills run by water power. The South avoids manufacturing, depends on tobacco until invention of the cotton gin makes cotton very profitable, boosting slavery. Thomas Jefferson mistrusts cities and views America's future as agricultural with small farms. Alexander Hamilton's vision is urbanized with a manufacturing type economy. This is beginning of the 2-party system. (20.03.00) = American economy after Independence. Hamilton is George Washington's Secretary of Treasury whose policies help create the new American economy, establishes the value of credit and debt, and boosts the role of the federal government. Taxes and tariffs to encourage American industry. Jefferson opposes these policies. (24.50.00) = The age of canals in early 19th century. The importance of the Erie Canal. It opens the Midwest to the Northeast markets away from the South. NYC becomes the commercial hub of the country The Erie Canal is not an example of laissez faire, requiring substantial government help. . (29.37.00 = The coming of the railroads starting in 1820s..Concept is brought over from England. Construction is expensive, must overcome many natural obstacles, requires the help of government, not laissez-faire. A major impetus to the American economy (34.33.00) = President Jackson's banking policies in 1832. He kills conservative U.S. 2nd Bank in Philadelphia, encouraging the loose credit "pet" banks in NY and western wildcat banks. Substantial short term result: business panic and ultimately economic depression in 1837. Substantial long-tern result: helps start of new business which become huge industries in the post-Civil War era. (47.17.00) = President Jackson's tariff policies. Favored by the North with growth of manufacturing. High tariffs undercut South's economic relationship with England. Becomes more and more a sectional issue between North and South. Role of states' rights to ignore federal law when deemed harmful to a state, and Jackson's harsh response to its use. (53.30.00) = Republican Party emerges in 1854. A Northern party, not a national party. Diverse component interests. Opposition to slavery by Northern capitalists is economic more than moral. Northern homestead farmers want West to be open to them, opposes expansion of slavery to West, not for moral reasons. Unionists want to keep the country together. (57.43.00) = Abolitionists. Abraham Lincoln elected president 1860. The South secedes as the Confederate States of America based on the institution of slavery, and the Civil War begins. Debate about whether the Civil War was inevitable. (59.26.00) = The Civil War. North's advantages include railroad network, banks to finance the war, ample shipping. South is hurt by its dependence on slave labor when blacks flee as war progresses. North's victory in Civil War is a turning point in American history, represented symbolically by Abraham Lincoln (1.03.55.00) = Post-Civil War Era. Significant growth of industrialization. During Reconstruction period, land is confiscated from plantation owners and divided among former slaves and poor whites to become small independent farmers. Effects of moral, economic and political concern for the defeated South to be subservient to the North.. (1.09.30.00) = End of Reconstruction. Election of 1876 and the Compromise of 1877 and the removal of federal troops from the South. Motivation is for troops to be available to break strikes in the North or subdue the Indians in the West. Ku Klux Klan terrorize small independent white and black farmers, driving them off their farms, and who become sharecroppers, guaranteeing a life of poverty. (1.15.41.00) = The North's great push forward for industrialization. Emergence of Robber Barons, the Gilded Age, great corruption. Generalizations about new industrialists: originally lower middle class, do not invent machinery or processes but understand the markets and apply English inventions and processes. Generally amoral, not operating under moral values, and above the law.

19th Century. American business model always toward monopoly. . Buying out competitor, price wars, sabotage, even violence. Also oligopoly, a few companies agreeing to share a market. Sometimes line is blurred between oligopoly and monopoly. Industrialists are dominant forces in the U.S. in last half of the19th century. (4.42.00) = The Horatio Alger image.and the dream of rags to riches. Thanks to the press and Horatio Alger novels, industrialists are positive role models despite corruption. (7.53.00) = The old and the new rich. The excesses and at times craziness of the new rich. (14.26.00) = John D. Rockefeller's image. He brutally crushes the striking miners, called the Ludlow Mine Massacre, and counters this negative image with public relations campaign. (19.38.00) = 20th Century, First Half. Growth of U.S. economic power.at end of 19th & beginning of 20th century. The old period of finance capitalism's reliance on banks. The start of mass production assembly, using applied time and motion studies. Auto industry has enormous impact on U.S. economy in the 1920s The old period of finance capitalism's reliance on banks. (25.48.00) = The Progressive Era.is a reform period but the reality is a partnership between business and the federal government. How the rhetoric is anti-business but the move toward monopoly increases not decreases. Theodore Roosevelt's reputation as a "Trust Buster" but his actions actually favor business. His reputation is champion of labor, but his negotiations in the anthracite coal mine strike of 1902 benefits the business community. (36.18.00) = The 1920s is the first modern decade. Advertising, credit buying, new industries. Impact of Lindberg's flight on the aircraft industry. Enormous profits, unwise real estate speculation.
(43.15.00) = The stock market crash of 1929 and the Depression of the 1930s. The government gives money to business to build jobs but business takes the money and runs.