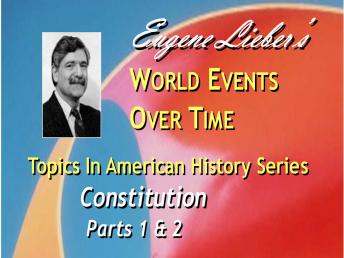 In the Beginning. 1776 Articles of Confederation. The federal government is weak. There is a one body Congress. Fear of a strong federal government. Power rests with the states intentionally. Chaos as each state going its own way. 1780s meetings trash Articles of Confederation replace if with the Constitution. (2.56.00) = The Constitution. It creates a powerful federal government with a division of powers using checks and balances: a president executive branch, a 2-segment legislative branch balancing big states and small states, and a judicial branch. The Iroquois Native Americans have the same governmental structure. The view that human nature is negative influences the Constitution, limits popular power. The Electoral College reflects the distrust of the common man. (4.54.00) = Bill of Rights. First 10 amendments added in 1791 to protect individual rights against majority rule. (6.21.00) = Amendment 1. Very broad. Separation of church and state, right to assembly, to peacefully petition the government, freedom of speech, freedom of press. Original context, interpretation, present context. (11.48.00) = Amendment 2. Regulated militia, right to bear arms, volunteer militia to defend country. New technology changes the perspective of this. Original context, present context. (13.47.00) = Amendment 3. Protections against quartering of troops. Original context, present context (14.56.00) = Amendment 4. Secure from search and seizure. This is very specific. Original context (17.38.00) = Amendment 5. Self-incrimination, double jeopardy protection. Not to be deprived of life or liberty without due process, nor property without due compensation. This is relevant today with issue of eminent domain. Role of grand jury, now marginalized, as buffer from powerful federal government. . Original context, present context (23.40.00) = Amendment 6. Right to a speedy and public trial (what is speedy?) by an impartial judge and jury in a local district (not applied in Jim Crow era). Must be informed of charges, can confront witnesses, can call witnesses. Assistance of counsel not guaranteed until the 1960s Supreme Court decision. . Original context, present context. (26.00.00) = Amendment 7. Entitled to a public trial if civil case is over a certain value. . Original context, present context. (26.31.00) = Amendment 8. Protection against excessive fine, excessive bail, against cruel and unusual punishment. The issue of today's debates about treatment of prisoners, and about capital punishment itself. . Original context, present context. (28.51.00) = Amendment 9. Rights that are listed do not deny other rights that are not listed. . Original context, present context. (29.30.00) = Amendment 10. Powers not delegated to the federal government remain with the states and the people. Original context, present context. (30.50.00) = Perspective on the Bill of Rights. One of the great documents in all history. Probably none but the 2nd Amendment would pass today in the U.S. Very few amendments added over 200 (33.26.00) = Supreme Court: The Marshall Court. Justices are appointed by the president, ratified by the Senate. John Marshall is chief justice for 30 years in the early 1800s. The concepts of judicial review, federal law over state law, states cannot tax the federal government, interstate commerce is federal not state, sanctity of the contract. The Cherokee land dispute found in favor the the Cherokees but not enforced by President Andrew Jackson, an Indian hater, ending in the "Trail of Tears." (47.57.00) = The Dred Scott Decision of 1856. nullifies the line of the Missouri Compromise of 1820 and opens all land not yet states to slavery. (52.00.00) = The Civil War. The 1863 Emancipation Proclamation frees slaves in the North not in the South. After the war, the 13th Amendment abolishes slavery, the 14th Amendment guarantees due process of law to all citizens (to protect ex-slaves), the 15th Amendment is passed during the period of Reconstruction, gives black males the right to vote but excludes all women. (56.48.00) = Gilded Age Robber Barons thwart efforts of the farmers' Granger Movement for federal regulation of the railroads in 1877 who are exploiting farmers. (1.02.04.00) = The Progressive Era reforms after 1901 are resisted by Supreme Court holdovers. In World War 1, President Wilson predicts intolerance at home. During the war Supreme Court rules that freedom of speech can be limited. The 1920s. The Supreme Court is very conservative and pro-business. (1.13.09.00) = 1930s. The Court blocks New Deal laws as infringement. In 1936 FDR attempts but fails to pack the court. Hugo Black is the first FDR appointee, becomes a great defender of individual rights, as is William O. Douglas. There is diversity in the quality of justices. Cardosa and Brandeis are unexpected appointees.

Racial Issues After the Civil War. The end of Reconstruction in 1877. Withdrawal of federal troops from the South. The battle for control of the one-party Democratic South between the upper and lower class whites is won by the upper class whites in 1896. Blacks are still enfranchised. Plessy versus Ferguson decision in 1896 upholds "separate but equal" concept of segregation as constitutional, gives judicial sanction to segregation. Jim Crow, using terror, eventually disenfranchises blacks. It is overturned in 1954, climaxing the conservative era dating back to late19th century. (4.21.00) = The 20th Century. Constitutional Amendments. Legislating morality. 8th Prohibition Amendment is ineffective. Aimed at victimless crime, it trivializes the Constitution. Is repealed by a later amendment. Lowering the voting age to 18. The vice president becomes president when the president is disabled. Limit Presidency to 2 terms. A reaction to FDR's 4 terms, affects Eisenhower. Rule has value because of the power of the executive branch. (7.17.00) = Stature of Justices. They should have a reputation for law, steeped in law not politics. (10.13.00) = Crises of constitutional interpretation. Examples are World War One hysteria, internment of Japanese-American citizens during World War Two carried out although they were known at the time to not be a security threat. The Cold War anti-Communist hysteria sanctioned by the Supreme Court is also a time of great dissent. (16.23.00) = 1960 Eisenhower appointments.