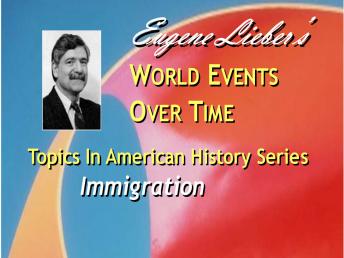 "Early Immigration. Immigrants' perspective: Each group considers itself legitimate, subsequent ones not so. Native Americans' role. Migration from South America to the U.S. Southwest. Colonial Era English Colonies start in early 1600s. The Puritan's Perfect Protestant Community in Massachusetts Bay Colony. They look down on newcomers as ""not saved,"" establishing class from a religious point of view. Ethnic types of farms of the European immigrants. Scottish-Irish settle in Southern colonies. Originally poor, some rise, become the Master Class, import slaves, create fictitious origins for themselves. (6.43.00) = Indentured servants. can work out of it, become full-fledged citizens in the frontier, with no stigma. Forced immigration of millions of slaves. (This is discussed in Minorities In America Series) (8.34.00) = Old Immigration. 1840s -1850s immigration is mainly from North and Western Europe -- England, Germany and Scandinavia -- for economic opportunity, to escape political persecution, and adventure. The land-starved peasantry find abundant land at the expense of the Native Americans. (11.26.00) = Absence of political tensions. Overwhelmingly Protestant immigrants coming to a Protestant country. It is not a problem being a minority. Immigrants bring craft trades and businesses, such as the German brew-masters. (13.41.00) = The exception of the Irish. They immigrate to escape famine caused by potato blight, become railroad builders and coal miners, low paying and dangerous work. They are Catholics in a Protestant country, are met with enormous hostility. 18.05.00) = Irish clash with Blacks in New York over working class jobs which free blacks have established as their right. The Draft Riots in the middle of the Civil War. (20.51.00) = Irish classes. The Lace Curtain Irish and the Shanty Irish. The Irish often return to visit their old country, unlike other immigrant groups. (23.00.25) = The New Immigrants: .Post-Civil War: 1880s-1920s. The beginning of industrialization. They come to escape political and religious persecution, desire for land, and economic improvement. They are from south and eastern Europe, including Catholics, Jews, and Eastern Orthodox. They are welcomed for the cheap labor but despised for their differences in religion, language, culture, and dress. (26.48.00) = Immigrants land at port cities. tend to remain, not to go west for farming land but gravitate to ethnic communities having political ward bosses who help with housing and factory jobs, and in turn expected loyal voters. (35.35.00) = The 2nd generation. become super-American, resent the old ways of their parents. The recent rediscovery of old world ties. (37.14.00) = Each ethnic group finds its unique way out of poverty. (41.27.00) = Immigration quota laws. . Starting in 1924 business judges the economy has sufficient labor force. The quota laws are drastic but selectively restrictive. The role of anti-immigrant feeling in the Sacco-Vanzetti case. (48.54.00) = Depression of the 1930s. has great impact on Jews fleeing Nazi Germany and the coming Holocaust. Mexico and Canada is more open to Jews, but not the U.S. (49.32.00) = Chinese immigrants are recruited for dangerous work on railroad building in the West, are treated as virtual slaves, face racism and exclusionary laws. (51.27.00) = Japanese immigration to the West for farming and small business, also experience racial hostility. In the Progressive Era of the 1900s a San Francisco school district attempts segregation. President Theodore Roosevelt, a strong racist, respects Japan's growing power, intercedes. (53.34.00) = The World War II internment of Japanese-Americans is upheld by the Supreme Court. It is known at the time by the government decision makers that the Japanese-Americans who are interned are no threat (57.07.00) = Post-war politics of immigration. New waves of immigration from all over the world seeking economic improvement. We restrict persecuted people from dictatorships we support. Those fleeing dictatorships we oppose are welcome.

This is especially apparent for Latin America. Vietnamese are welcomed after the Communist victory. (59.11.00) = Today's Issues. Economic. Cheap labor. The rebirth of sweat shops. Legal and illegal immigrants are exploited. They are not subject to minimum wage law, other laws. The Administration supports immigration to earn business support (1.01.48.00) = Public attitude that immigrants exploit benefits. They are mainly motivated to escape poverty by hard work and to support family back home, and may return back there later. California studies show there is some merit to the argument that they are filling jobs others do not want. (1.05.53.00) = Economics in native countries. The gender role of Mexican women in Texas changes away from patriarchal dominance. U.S. influence in Mexico by business relocations. U.S. agricultural subsidies undercut native agriculture, destroying Mexican farmers, forcing them to immigrate. U.S. labor is concerned with lowering of the wage scale. (1.12.14.00) = Xenophobia. Hatred of foreigners is part of U.S. history. (1.14.26.00) = U.S. as safe harbor for suffering people in other countries, a humane attitude of welcome. "