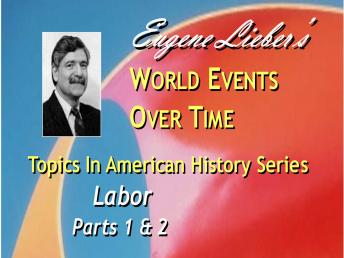 Pre-Industrial Era. The U.S. is an agricultural country until the industrial era. In Colonial America, the work force consists mainly farm labor including indentured servants who can become independent farmers after they work off their debt. In the coastal cities there are some low level industrial jobs in shipping and businesses. The beginning of worker associations in response to harsh conditions (4.50.00) = After the American Revolution. America is not a classless society. In the North the merchants in urban areas are the Master Class with its underclass workers called Mechanics. In the South planters are the Master Class with poor whites and slaves as its underclass. (8.31.00) = Beginnings of manufacturing. . At the end of the 18th and beginning of 19th centuries mill towns spring up along the rivers. The rivers are a source of power, transportation, source to dump manufacturing wastes, and paradoxically, a source of drinking water. (11.15.00) = Beginnings of labor unrest. Women are recruited to work in the Lowell mills from the age of 15 until 30. Men are working in nearby factories. Labor associations begin to organize for bread-and-butter issues, leaving a history of labor unrest (14.16.00) = Industrial Era. The Civil War is a turning point for major industrialization, with the rise of technology and the birth of the factory system, especially in the last 1/3 of the 19th century. (14.41.00) = New immigration. to fill labor needs, 1880 to early 1900s, mainly from southern and eastern Europe and Irish peasants. Competition for jobs including railroad building and coal mining with earlier immigrants from western and southern Europe. Catholics are despised by earlier Protestant arrivals. The issues behind the draft riots of 1863 by Irish. (18.49.00) = Blossoming of the industrial giants. Now there is a full-fledged industrial labor, including housing for workers. Workers are living in primitive conditions. Working conditions are very harsh. Factory tasks are fragmented, offer no pride in work, in contrast with farming. (31.10.00) = The Labor Movement. Workers respond to conditions with apathetic hopelessness, upward aspirations (although there is little prospect for improvement in the early industrial era), rags-to-riches fantasy reflected in the popularity of the Horatio Alger stories, and also resistance (37.14.00) = Unions organize to provide collective leverage not available to individual workers. Reconstruction ends in the South in 1877 and federal troops are shifted for strike-breaking in the North. . (40.18.00) = The violent episode of the Molly McGuires. (42.27.00) = The AFL is formed in 1880s incorporating skilled workers, and led by Samuel Gompers for 40 years. It accepts the capitalist system, wants a bigger piece of the pie. Gompers is enticed to cooperate with newer more sophisticated business leaders which emerge later in the 19th century. (46.33.00) = Socialist movements from Europe, utopian or individual, believe the capitalist system is inherently unjust, is also homegrown by Eugene Debbs. (48.26.00) = The union defeats in 1886 Chicago Haymarket strike and especially the Carnegie iron and steel plant strike in Homestead, Pennsylvania, set back union efforts until1919 when they are defeated again, not to succeed until 1937. . (58.43.00) = The pattern of repeated strike violence by either side, but always blamed on the workers by upper class-controlled media, turns the public against labor. Pullman Car workers strike in 1894 during a then depression and are joined by railroad workers. Debbs comes out of prison, runs for President and shows surprising strength early in the 20th century. (1.08.54.00) = Family size. The number of children in higher class families decreases. Family size increases in working class families because a child is put out to work at the age of 6 to add family income. (1.15.51.02) = The number of children in higher class families decreases. Family size increases in working class families because a child is put out to work at the age of 6 to add family income. (1.12.14.00) = Family church attendance. Despite the comfort of religion promising an after-life, family church attendance declines. The sermon's messages include: obey the owners, life is suffering, living in sin, accept your fate. (1.15.34.00) = Early 20th century. The 1902 Anthracite Coal Strike is led by John Mitchell against a wage cut and is opposed by a company that believes its property rights are God-given. President Theodore Roosevelt intervenes, forces the owners to negotiate and a settlement is reached. President Roosevelt's motives are questioned.

20th Century - 1st Half. ""Champion of Labor."" President Theodore Roosevelt is erroneously seen as champion of labor for his role in settling the violent and bitter anthracite coal strike of 1902 by forcing company hard liner George Bear to settle with the union. The workers win only the restoration of cut wages. Roosevelt's motivation is the need of coal by industries and for home heating, not the workers' cause. (5.44.00) = Post World War I. The U.S. is very prosperous but unions are very weak. There is large migration from farms in the South to cities in the North, hoping for a better life. Blacks move into white areas, competing for jobs, and sometimes are used as strikebreakers. (8.41.00) = The Depression 30s. Union organizing expected to be better in prosperous times and harder in the Depression, yet the 1930s sees great advances in labor unions. Factors include the New Deal of Franklin Roosevelt whose earlier efforts to help business are rebuffed, then in 1935 he turns to the working poor. New legislation include a progressive income tax and social security insurance. (13.20.00) = Wagner Act (National Labor Relations Act) establishes workers the right to a union of their own choice, requires companies to bargain in good faith, ushering in a period of successful union growth. (14.43.00) = CIO Union. is formed for industrial workers nationally, headed by John L. Lewis from the Coal Miners' Union (16.07.00) = Auto and steel industry resistance. Henry Ford is fanatically anti-labor union, applies harsh methods to break strike. The union uses tactic of the sit-down strike, occupying factories and preventing production. Auto companies settle and sign contracts with the auto unions. Main motivation is fear of damage to machines in factories. (20.07.00) = Republic Steel strike of 1937. Workers on strike are having peaceful holiday picnic with families when police appear and shoot into the crowd. This is recorded and shown in newsreels across the country causing negative public opinion, and becomes a major labor victory.
(24.31.00.00) = Role of Communist Party. in the labor movement in the 1930s. In the excitement of the Russian Revolution some are blind to Stalin's brutal rule in the USSR in the 1930s. Communists are disciplined, dedicated, are effective labor organizers in labor's ranks, and are accepted by non-communist labor leaders. (25.57.003) = First minimum wage law in 1938 shocked the nation because of the huge numbers of workers whose wages more than doubled as a result. Federal agencies are created to promote employment for skilled workers, for unskilled industrial workers, for the creative professions, and for teenagers. (28.38.00) = World War II ends the Depression. John Maynard Keynes' dictum that jobs is the answer because workers become consumers, the bottom-up theory of economics. Full employment follows business' confidence in a war economy. (38.17.00) = World War II advances civil rights. civil rights for blacks and women by opening many new job areas for them. After the war they resist efforts to return them to pre-war status, leading to civil rights movements. (39.37.00) = 20th Century - 2nd Half. Onset of the Cold War. Republican congress under Democrat President Truman passes the Taft-Harley Bill which rolls back some labor gains from the Wagner Act. It especially excludes communists from union leadership, aimed at effective union organizers. War economy continues, with high prosperity in the 1940s and 1950s. AFL and CIO unions merge in mid-1950s under leadership of George Meany. (45.02.00) = Industry moves away from the Northeast and the upper Midwest which have the most successful labor contracts. The shift is to the South and Southwest where unions are less effective. Legislators resist raising minimum wage. (47.10.00) = 21st Century. Real wages. Wages in relation to the cost of living over the last 35 years decline (48.23.00) = Work time. Although industry automation is greatly increased, work time has not decreased but actually increased approximately 1 month per year on the average. (50.13.00) = Gender and race issues. Men resist women in the workforce, possibly lowering the wage scale, still clinging to the idea of the man as the breadwinner, a concept irreversibly changed by the Depression and World War II. From the 1960s on, it is unrealistic to expect a single wage earner to maintain a middle class family life. Also women now expect the right to choose. (54.49.00 = State of labor movement today. Labor is now weak in the U.S. Only 10-20% of workforce is unionized. Anti-union efforts of companies are very effective. Workers' (59.49.00) = Unemployment figures are not realistic. Not counted as unemployed are those whose unemployment benefits have run out, and the part-time employed. (1.04.04.00) = The nature of jobs. In the post-industrial age industrial jobs have moved overseas to areas with low labor costs and weak pollution laws. When the factory moves, no longer is there the tradition of a son moving into his father's job. The son must look elsewhere. Increased service economy but mostly low paying with little expectation of improvement. (1.06.25.00) = Unions. Some are dedicated to the rank & file, others are corrupt, close to management, with potential violence against reformers. Pension plans are insecure. Workers are at considerable risk of losing their jobs, psychologically insecure, with the prospect of becoming destitute close at hand. The struggles for gains in the past come to today's uncertainty for labor's future.