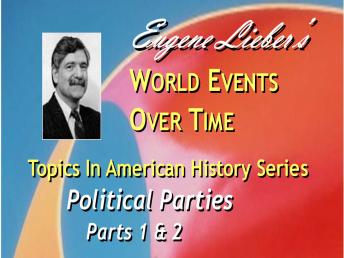 In the Beginning. The Constitution. Creates the division, separation of powers of government. There are no political parties at the first presidential election The first political party. Thomas Jefferson opposes the economic policies of Alexander Hamilton's Federalist Party which advocates a strong central government and presidential power in the 1790s. Jefferson and Madison form the Anti-Federalist Party. Jefferson's party is the Democratic Republicans, wins the 1800 election after which the Federalist Party declines and dies, leaving one party. (8.33.00) = The 19th Century. The second American party system of the 1820s. Andrew Jackson thwarts the election of Quincy Adams. The Democratic Republicans become the Democrats and are opposed by the Whigs. Both are national parties reflecting the growing sectionalism between the anti-slavery North and the pro-slavery South. Confrontation is avoided in the1830s and 1840s (14.12.00) = The Republican Party. The Mexican War leads to great American expansion in the 1850s under President Polk. The Whigs decline and the Republican Party emerges in 1854. It starts as a Northern anti-slavery party supported by Northern capitalists who want Southern cotton now going to English mills, and high tariffs. Other elements include the homestead farmers to the West who oppose slavery expansion for racist motives, wanting to keep the West white, the Unionists headed by Abraham Lincoln, the Nativists who are against foreigners, and the Abolitionists, the only ones with a moral issue. Lincoln is elected in 1860 and the South secedes. (22.50.00) = The Civil War.. Lincoln is reelected 1864, the war ends April 1865, and Lincoln is assassinated. Reconstruction and the moral concern for the ex-slave. The 18th Amendment gives black males the vote. The Republicans dominate and remain in power mostly until the Depression 1930s. (28.53.00) = The 20th Century. The Progressive Era.from 1900 to 1912 is a reform period, but results are less than the rhetoric. Progressive Era ends. President Taft's reelection is challenged by Theodore Roosevelt who forms the "Bull Moose" Progressive Party, and Democrat Woodrow Wilson wins a split vote. The U.S. enters the war, ending the Progressive Era. Eugene Debbs of the Socialist Party is jailed for speaking out against U.S. entry into World War One. The war ends. American disillusionment with the war, Wilson's rigid positions and the Senate's refusal to sign the Treaty of Versailles. (39.07.00) = Republican Warren Harding.is elected president. Both parties are similarly conservative. The KKK becomes nationally strong in the 1920s. Calvin Coolidge becomes president when Harding dies, runs in 1928 and is elected. (42.02.00) = A strong Republican tide elects Herbert Hoover president against Catholic Al Smith in 1928. City voters shifting to Democratic Party. Hoover is ineffective in Depression.. (44.46.00) = The Democrats elect Franklin Roosevelt in a landslide in 1932 after the Great Depression begins. Another landslide victory for FDR in 1936. Republicans remain pro-business, anti-labor.

The 20th Century. (continued). World War Two ends the Great Depression. American gunboat diplomacy and control of business interests in Latin America. The Spanish Civil War as a prelude to World War Two. The rise of Nazism in Europe and growing danger of fascist Japan in the Pacific. FDR breaks the 2 term tabu and wins a third term in 1940, is elected a 4th time in 1944 and dies on April 1945 just before the end of the war. (9.45.00) = President Harry Truman and the onset of the Cold War. Revival of the war economy. Revival of the Republican Party which takes Congress in 1946, and passes the anti-labor Taft-Hartley Act. Truman, against odds, is reelected in 1948, desegregates the armed forces. (12.21.00) = The Red Scare. Truman starts the Red Scare which is made the most of by the Republicans. Red hysteria builds during the Korean War of 1950, the Russian atomic bomb, and the loss of China to the Communists. The rise and fall of Sen. Joseph McCarthy. The Dixiecrat Party emerges in the South. Henry Wallace of the Progressive Party tries to stem the Red Scare. (15.30.00) = The 1950s. Birth of the Modern Civil Rights Movement. Brown versus Topeka, Kansas Bd. Of Ed., 1954. Pres. Eisenhower uses troops to enforce desegregation law. Pro-business decade. Republican Party holds (16.46.00) = 1960s decade of great fervor, change and chaos. The Modern Women's Rights Movement. LBJ pushes civil rights movement, resisted by the Republicans, but Vietnam War diverts this effort. Assassination of Democratic candidate Robert Kennedy. Richard Nixon is elected President in 1968 on promise to end Vietnam War. The 1970s. Nixon is reelected in 1972 but quits in disgrace amid the Watergate scandal, is pardoned by Gerald Ford who replaces him. Democrat Jimmy Carter from the South wins in 1976. (28.00.00) = The Reagan 1980s. The Southern Strategy taps into Southern whites' resistance to the civil right movement, makes the Republicans the dominant party of the South. Ronald Reagan is elected in 1980 and reelected in 1984. Conservatives now connect religion to politics. Aggressive foreign policy. (37.28.00) = Contraction in government under Reagan. Reagan wants deregulation and limited government role in general but also wants strong government to intervene in moral issues. He espouses fiscal responsibility but hypes military budget into huge deficits. Republican George Bush is elected President in1988. (41.41.00) = Right turn in Democratic Party is part of rightward turn to Republican extremism. Southerner Bill Clinton is elected President in 1992. He passes moderate welfare reform, pursues other moderate social policies, yet his presidency is violently attacked from day one. He is reelected in 1996. (43.58.004) = Current issues. The rightward turn has shifted all political labels to the right in both parties. The second Iraq War and issues of truth and lies, the costs versus the goals. The future of the two parties and the role of older points of view is not clear.