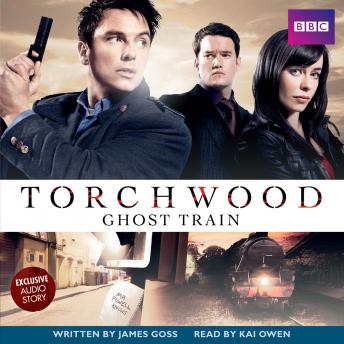 It’s not easy being Rhys Williams. You’re married to the sexiest woman in Torchwood. She saves the world for a living, you move lorries round in a timely fashion. Suddenly, you’ve got a mystery of your own. Oh, it starts off being about missing fridges. But it leads to a midnight train pulling into an abandoned platform at Cardiff Station. What is the mysterious cargo that Rhys is unloading from the train? Where’s it going? And what can be behind it? Rhys Williams is going to get to the bottom of it. All by himself, thank you very much. Soon Captain Jack is missing, his wife’s dead, and it’s up to Rhys to try and put everything right. And find those fridges... Written specially for audio by James Goss, Ghost Train is set before the ‘Children of Earth’ TV story and features Captain Jack Harkness, Gwen Cooper and Ianto Jones, as played by John Barrowman, Eve Myles and Gareth David-Lloyd in the hit series from BBC Television. It is read by Kai Owen, who plays Rhys.