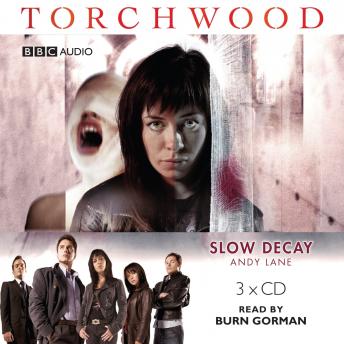 When Torchwood track an energy surge to a Cardiff nightclub, the team finds the police are already at the scene. Five teenagers have died in a fight, and lying among the bodies is an extraterrestrial device. Next morning, they discover the corpse of a Weevil, its face and neck eaten away, seemingly by human teeth. And on the streets of Cardiff, an ordinary woman with an extraordinary hunger is attacking people and eating her victims. The job of a lifetime it might be, but working for Torchwood is putting big strains on Gwen's relationship with Rhys. While she decides to spice up their love life with the aid of alien technology, Rhys decides it's time to sort himself out - better music, healthier food, lose some weight. Luckily, a friend has mentioned Doctor Scotus's weight-loss clinic... Read by Burn Gorman, who plays Owen Harper, this thrilling adventure by Andy Lane features Captain Jack Harkness, Gwen Cooper, Toshiko Sato and Ianto Jones, as played by John Barrowman, Eve Myles, Naoko Mori and Gareth David-Lloyd in the hit series from BBC Television. Contains adult themes and language.