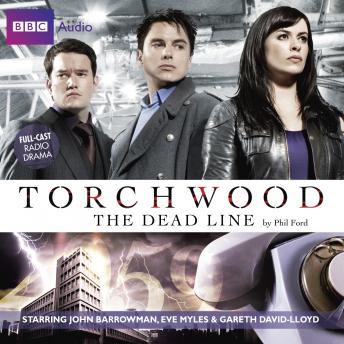 When a Cardiff hospital is inundated with patients that have fallen into coma-like trances, Torchwood move in to investigate. They find that the trances were triggered by phone calls, all of which were made from a number that hadn't been active for over 30 years. Determined to find out who's been calling the unfortunate victims, Jack rings the mysterious number - two, zero, five, nine - nothing. It's a dead line. Until it calls Jack back, he answers - and falls into a deep trance... With the help of one of Jack's old girlfriends, eminent neuroscientist Stella Courtney, the team have to race against time to find the source of the 'infection' and save the patients... Written specially for BBC Radio by Phil Ford, The Dead Line stars John Barrowman as Captain Jack Harkness, Eve Myles as Gwen Cooper and Gareth David-Lloyd as Ianto Jones.