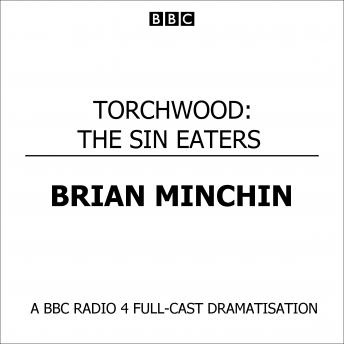 Searching for the source of a bizarre Rift reading, Gwen, Jack and Ianto find a corpse on the beach, his face covered in hundreds of tiny cuts. Watching from the shadows is a man in black... The Reverend Hayward thinks he has found a way to take away people’s sins. The trouble is his special baptisms tend to take away their lives, too, for the creatures he collects and puts in his church font are nightmarish parasites, feeding on their hosts’ negative emotions before consuming them. It is up to Torchwood to track them down and destroy them... Written especially for audio by Brian Minchin, The Sin Eaters features Captain Jack Harkness, Gwen Cooper and Ianto Jones, as played by John Barrowman, Eve Myles and Gareth David-Lloyd in the hit series from BBC Television. Contains adult themes and language.