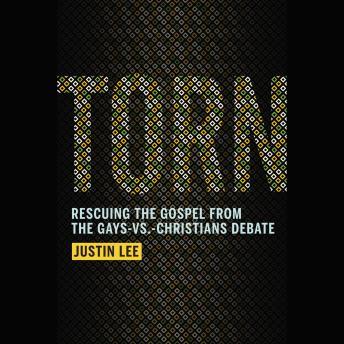 Torn: Rescuing the Gospel from the Gays-vs.-Christians Debate

Justin Lee, a gay man and devout Christian, bridges the gaps between his faith and sexuality in this insightful and touching memoir.
As a teenager and young man, Justin Lee felt deeply torn. Nicknamed 'God Boy' by his peers, he knew that he was called to a life in the evangelical Christian ministry. But Lee harbored a secret: He also knew that he was gay. In this groundbreaking book, Lee recalls the events--his coming out to his parents, his experiences with the 'ex-gay' movement, and his in-depth study of the Bible--that led him, eventually, to self-acceptance.

But more than just a memoir, TORN provides insightful, practical guidance for all committed Christians who wonder how to relate to gay friends or family members--or who struggle with their own sexuality. Convinced that 'in a culture that sees gays and Christians as enemies, gay Christians are in a unique position to bring peace,' Lee demonstrates that people of faith on both sides of the debate can respect, learn from, and love one another.

Torn: Rescuing the Gospel from the Gays-vs.-Christians Debate