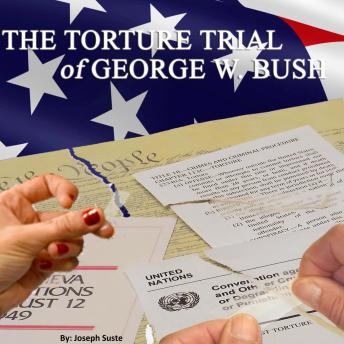 During a dark period in the history of the United States, a few powerful government officials twisted the meaning of our laws and trivialized our human rights principles. This novel peels back the deceitful veneer of political gamesmanship to expose travesties committed against our fundamental human values and the US Constitution.

The narrative exposes the criminal actions of individuals who continue to make bold assertions that torture was necessary and that the torturers are above the law. It does not redeem us, the American people, of our culpability. Crimes have been committed and we have yet to meet our responsibility to prosecute the perpetrators.

The story unfolds within the bounds of existing statutes and develops a practical approach for bringing the perpetrators to justice—the first step in any attempt at reconciliation.

There is realism in the background which relies heavily on information gathered by professional journalists and investigators around the world. The legal basis is drawn from US Code and the published opinions of qualified legal experts.

Here is a work of fiction, with fictional paladins reacting to the actions of non-fictional characters and historical events. We can envision real people following in the footsteps of the story’s protagonists. It is only necessary to find the courage to act.

Torture should never happen again—but if left unchallenged and unpunished, it will. “President Obama signed Executive Order 13491 in January 2009 to prohibit the CIA from holding detainees other than on a 'short-term, transitory basis' and to limit interrogation techniques to those included in the Army Field Manual. However, these limitations are not part of U.S. law and could be overturned by a future president with the stroke of a pen.”

It is Time to re-establish our nation under the principle championed by John Adams who espoused a government of laws—not of men,