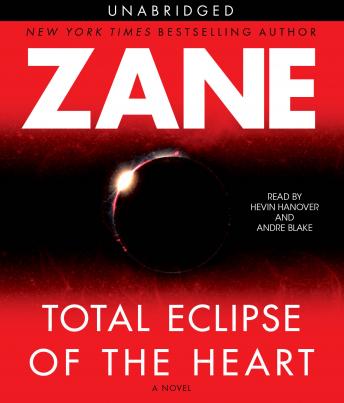 Total Eclipse of the Heart

Her first time on CD, New York Times bestselling Queen of erotica, Zane, delivers a long-awaited new novel about two couples whose lives intersect in surprising ways after one of the men saves both women from a car crash.

Brooke Alexander is in love with one of Washington, D.C.’s most prominent attorneys. Patrick is everything that dreams are made of, or so it seems. One day, Patrick can be loving and supportive, the next, demeaning and angry at the world.

Damon Johnson has been married to his wife, Carleigh, for four years. He is compassionate, honest, and worships the ground that she walks on. But Carleigh treats Damon like a trophy, allowing her friends to salivate over him and disrespect their happy home. Damon has dreams outside of his six-figure corporate job and Carleigh treats his life aspirations like a joke. Her selfish nature makes Damon wonder if he made the right decision when he asked for her hand in marriage.

A tragic event forces Brooke and Damon to become a part of each other’s lives. Through the darkest of times, they find the courage, strength and perseverance to discover the true meaning of unconditional love when, together, they experience a total eclipse of the heart.

Total Eclipse of the Heart