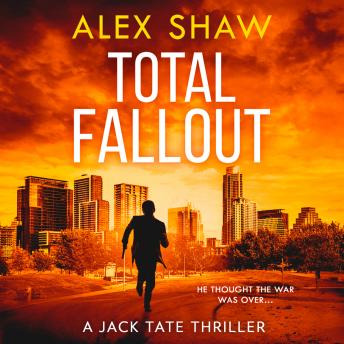 A fast-paced and explosive action thriller, perfect for fans of James Deegan.


Jack Tate thought the war was over…


‘Alex Shaw is one of the best thriller writers around!’ Stephen Leather

His worst enemy is back.
Former SAS trooper Jack Tate is running a black op for MI6 when the man who killed his parents comes out of hiding. On a quest for revenge from Monaco to Qatar and into the US, Tate must stop at nothing if he is to catch the world’s deadliest assassin.


His worst nightmare is beginning.
But the assassin is hunting too. Members of his old unit, The Werewolves, might hold the key to a new weapon – one with the power to end civilisation as we know it.


And this is his last chance for revenge…
As Tate tracks the Russian, the line between friend and foe, and good and evil starts to blur. Now Tate must break all the rules to avenge his family and save the world from the chaos of war…

Perfect for fans of James Deegan, Tom Clancy and Mark Greaney, this is an explosive action thriller you won’t be able to put down.

Readers love Total Fallout!
‘Another blockbuster. Non-stop action and a storyline that had me hooked from beginning to end!*****’ Netgalley reviewer


‘A brilliant read – I stayed up most of the night reading it! *****’ Netgalley reviewer