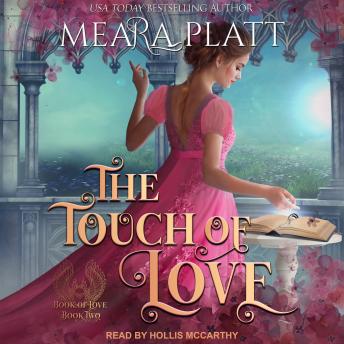 The Touch of Love

What makes a man fall in love? The Book of Love holds the answer, or so Poppy Farthingale believes . . .

Poppy Farthingale has made a pact with her two best friends to use The Book of Love to find true love. How else will Nathaniel Sherbourne, Earl of Welles, ever notice her? With a small dowry and no prominent lineage, Nathaniel will never consider her a suitable wife, especially when her competition is a beautiful duke's daughter who has already been declared an Incomparable. Poppy has four days to win his heart, but with time running out and her rival about to attend a weekend party at Nathaniel's country home, is all hope lost?

Nathaniel Sherbourne, Earl of Welles, is a man whose heart has been bruised by the ravages of war. He is in no rush to marry, for he's a wealthy and titled bachelor with debutantes aplenty eager to gain his notice. In any event, he has a blackmail scheme to unravel before he can turn his mind to more romantic ventures. But his sister's shy friend, Poppy Farthingale, is suddenly capturing his attention. She's toting around The Book of Love, and he's promised to help her find a suitable match.

But is it possible that he, in fact, is the right man for Poppy?