Touching History: The Untold Story of the Drama That Unfolded in the Skies Over America on 9/11 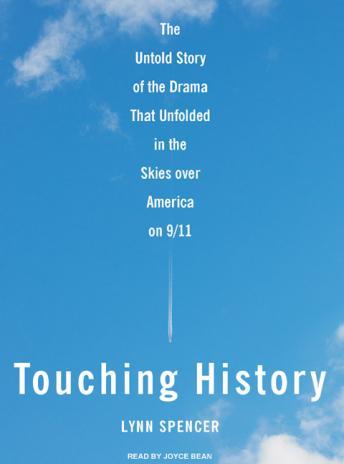 Touching History is told through the eyes of commercial airline pilots, FAA and military controllers, jet fighters and key military personnel at the North American Aerospace Defense Command (NORAD) and its subunit Northeast Air Defense Sector (NEADS), and the national FAA Command Center, whose personnel had to grapple with the bizarre and unprecedented unfolding drama of the attacks.

In a round-robin narrative in the style of Jim Dwyer and Kevin Flynn's 102 Minutes, Lynn Spencer takes readers right to the front lines of the unfolding drama as the realization hits that multiple hijackings are underway and then that the country is under attack. From the computer screen of the comptroller who first noticed that American flight 11 was flying off course, to the phone call from a stewardess onboard alerting American Airlines emergency personnel that hijackers had killed two flight attendants and entered the cockpit, to the battle cab of the military commander who ordered fighter jets in the air and the NASA-like operations floor of the FAA Command Center, to the cockpits of a number of the 4,500 commercial airliners flying over the United States that morning, Spencer follows the story all the way through the end of the day, when the fog of war had finally lifted and the country could assess exactly what had happened.

Spencer conducted hundreds of interviews and spoke to every key player in the airline industry and military who was involved in the major air events of the day-including a number of people the 9/11 Commission did not speak to. We hear from Ben Sliney, the man who came to work that morning for his first day on the job as the Operations Chief of the FAA and who made the brilliant, unprecedented decision to ground every commercial plane in the sky and close U.S. airspace; the military commanders who decided to override protocol and send fighter jets to defend Washington without approval; the pilot of Delta Flight 19889, which was mistakenly identified as a fifth hijacking; and the sole FAA controller who stayed at his post in the Boston Center, which was reported to be under attack, and provided the military with almost all of the information it got about the whereabouts of hijacked planes.

Based on highly detailed accounts from these interviews, as well as on the voluminous records of radio transmissions from the controllers, the hijacked planes, and many of the other planes that were in the air that day, Spencer fills in many holes in the story as it was reported by the 9/11 Commission. She also brings to pulse-quickening life the confusion, the horror, and the fierce determination and quick thinking of so many key players as they improvised their responses to a shocking new type of warfare.

Touching History: The Untold Story of the Drama That Unfolded in the Skies Over America on 9/11