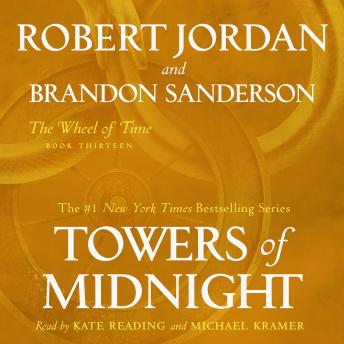 Towers of Midnight: Book Thirteen of The Wheel of Time

With Robert Jordan’s untimely passing in 2007, Brandon Sanderson, the New York Times bestselling author of the Mistborn novels and the Stormlight Archive, was chosen by Jordan’s editor—his wife, Harriet McDougal—to complete the final volume in The Wheel of Time®, later expanded to three books.

In Towers of Midnight, the thirteenth novel in Jordan’s #1 New York Times bestselling epic fantasy series, the Last Battle has truly begun. The seals on the Dark One’s prison are crumbling. The Pattern itself is unraveling, and the armies of the Shadow have begun to boil out of the Blight.

The sun has begun to set upon the Third Age. And trials by fire await those fighting against the darkness that encroaches from their enemies—and within themselves…

Perrin Aybara is now hunted by specters from his past: Whitecloaks, a slayer of wolves, and the responsibilities of leadership. All the while, an unseen foe is slowly pulling a noose tight around his neck. To prevail, he must seek answers in Tel'aran'rhiod and find a way—at long last—to master the wolf within him or lose himself to it forever.

Mat Cauthon must once again face the creatures beyond the stone gateways, the Aelfinn and the Eelfinn. He had hoped that his last confrontation with them would be the end of it, but the Wheel weaves as the Wheel wills. The Tower of Ghenjei awaits, and its secrets will reveal the fate of a friend long lost.

Rand al’Thor, the Dragon Reborn, arrives at the White Tower with a startling revelation for Egwene al’Vere. Fearful for his sanity, Egwene summons the rulers of the Borderlands to stand against him—knowing the fate of the world rests in their hands.

I really enjoyed this book. Very well written. Love the characters. Keeps me interested. The narrators are of course awesome. They make me feel like I'm there. Love the series.

Love the whole series have waited forever to get then all

Thrilling read. Had my headphones on everywhere cause i needed to get to the exciting bits. I also had tears and laugh out loud moments.

Just plain awesome. I can't believe I never read these books before. I think had I have, I would have worked harder in English classes in high school lol . VERY well read by the narrator's as well.

This was the best bookie read in the series yet. Ohio the next one is as good as this one.

Although I think Brandon Sanderson has stayed true to Robert Jordan's series and very close to his writing style, I am really getting fed up with how wordy these books are. At this point, I have been working on reading/listening to this series for close to a decade. In some books there seemed to be no forward movement on the basic story lines at all. Too much time is spent on side plots and secondary characters. By the time the last book finally comes out, I wonder whether I will even bother to listen. That being said, I did listen to ALL 30 discs and I love the narration.

A thrilling tale that begins to bring all the many charecters back together aiming toward an ultimate climax. This series was quite exceptional until the last book or two when the wheels began to fall off. It was a case of too many small charecters distracting from the main story line. This book however begins to dispense with the minor plots and reminds the faithful of the majestic story that has so bequiled us in past volumes.

I really enjoyed this book, it moves along quite quickly despite being 30 (!!!) discs long. I actually lost sleep on this one because I couldn't turn it off. This is the thirteenth installment of 'The Wheel of Time' (14th if you count the prequel 'New Spring') A series started by Robert Jordan over 20 years ago. The original creator of this world, Robert Jordan, was unfortunately, unable to complete the entire series because 'The Powers That Be' had other plans for him.. However, Brandon Sanderson who was tapped to finish the series, has done an EXCELLENT job of carrying on the storyline. He has remained true to Jordan's world and vision and even his style while at the same time adding his own special flavor. Sanderson was obviously a big fan of the original Jordan vision because he carries it on so well. In Short, I highly recommend this book, as long as you've already read the other 14 books leading up to it.