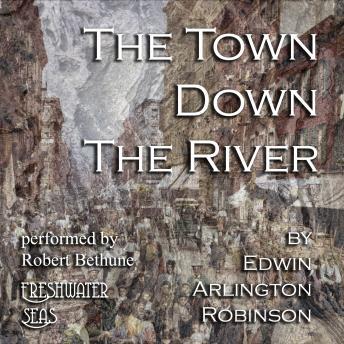 The Town Down the River

In 1910, when Edwin Arlington Robinson published The Town Down The River, he included what has become one of his most famous poems: "Miniver Cheevy." His portrait of this man, a "child of scorn" who "wept that he was ever born," who "sighed for what was not," who "scratched his head and kept on thinking," captures Arlington's sense of life in 32 immortal lines.

The other poems in the book, though not as famous as "Miniver Cheevy," amplify and explore Arlington's sense of the fate of humankind in ways both serious and comic. He can be mystically, really Biblically, allegorical, as in "The Wise Brothers;" he can be amused, cynical and detached, as in "Doctor of Billiards." He can be both relieved and amazed to find a human life that has redeemed itself, as in "Shadrach O'Leary," and both frightened and bewildered by the inscrutable lives that confront him, as in "Alma Mater."

No matter what mood he takes, his instinct for human nature, his understanding of the great issues that shape life and fate, and his ability to find deep meaning in the commonplace make his work as intriguing today as it was in his own day - a day in which he won no less than three Pulitzer Prizes.

Town Down the River