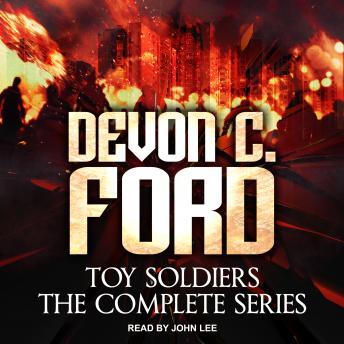 Apocalypse: Disorder and chaos ravage London when thousands are contaminated by the accidental discharge of an experimental bio-weapon. The disease robs its hosts of rational thought, giving them a singular desire-find more living flesh to infect.

Aftermath: Peter, alone by choice and oddly thriving, finds himself suddenly responsible for the life of someone other than himself. Elsewhere, other survivors stake their own claims to land and resources, but the inexplicable swarms of undead threaten to gather and dissipate constantly.

Abandoned: The virus spreads to every corner of the country while the combined forces of the naval fleet set sail for deeper waters and leave the UK to its fate. The few groups that remain are separated after a fateful battle for England, left to their own devices.

Adaptation: The apocalypse continues in the penultimate chapter of the Toy Soldiers series. Will anybody make it out alive?

Annihilation: Fleeing the seemingly unstoppable enemy, the survivors pin their hopes on a final attempt for freedom, but that means they must turn their backs on their home forever.