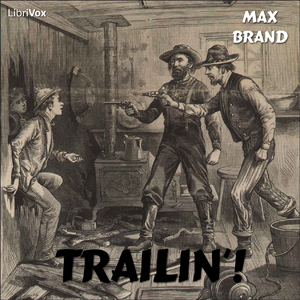 "Max Brand", the most used pseudonym of Frederick Schiller Faust (1892-1944), is best known today for his western fiction. Faust began in the early twentieth century selling his stories to the pulp magazines, writing in many genres under numerous pseudonyms. He is probably best known as the creator of the character Destry. His novel Destry Rides Again has been filmed several times, most notably the 1939 version starring James Stewart and Marlene Dietrich. Also his character Dr. Kildare which was popularized in film and on television earned him a fortune. Faust’s novel The Untamed, the first of three novels featuring the classic western hero Dan Barry was filmed in 1920, starring Tom Mix. Faust became a front line war correspondent and died of wounds received while traveling with American soldiers in Italy, May 12, 1944.

Trailin’ (1919) tells the story of Anthony Bard, a young aristocract from the east with a hunger for adventure, who sees his father murdered in the yard of their home. This starts young Anthony on a trail of vengeance that leads him to the far west. Here, Anthony, a tenderfoot with a knack for survival must track down a legendary outlaw who waits for him, not with a gun, but with a story. Along the way he braves the elements, resists a band of cold-blooded killers and finds love. A classic western revenge plot…..with a twist. (summary by Rowdy Delaney)