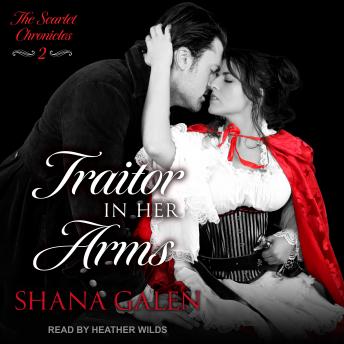 Traitor In Her Arms

Two morally compromised souls wage a battle of wits-and seduction-against the backdrop of the French Revolution in this slow-burn romance from bestselling author Shana Galen.

After her late husband leaves her in debt to some dangerous people, Lady Gabrielle McCullough is forced to become a thief. In the intervening years, her skills have not gone unnoticed. After being recruited by the Scarlet Pimpernel, the mysterious do-gooder spiriting aristocrats out of revolutionary France, Gabrielle crosses the Channel for the most daring mission of her life. Accompanying her is the Earl of Sedgwick, a thief in his own right and an enticingly masculine presence. The man is not to be trusted-nor is Gabrielle's body when he's near.

Ramsey Barnes would not say he is an honorable man. His whole life has been based on a lie; why change now? Although it pains him to deceive the tantalizing Gabrielle, he's working toward an altogether different objective: unmasking the Scarlet Pimpernel. If Ramsey fails, his blackmailer will ruin him. But when Ramsey's confronted with the carnage of the Reign of Terror, he seeks refuge in Gabrielle's heated embrace. Now he faces a terrible choice: betray the woman who's stolen his heart-or risk losing everything.

Traitor In Her Arms