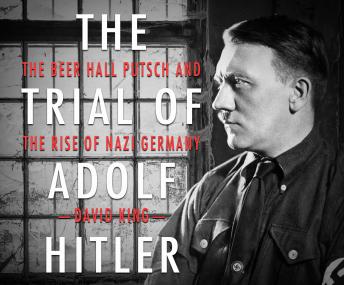 The Trial of Adolf Hitler: The Beer Hall Putsch and the Rise of Nazi Germany

February 26, 1924 was the first day of the greatly anticipated high treason trial that would galvanize Germany - but few in the courtroom that morning anticipated that the leading defendant, General Erich Ludendorff, whose risky offensives during World War I doomed Germany to defeat, would soon be eclipsed by the private first class at his side, Adolf Hitler.

Hitler was charged with treason after unsuccessfully trying to seize power in the notorious Beer Hall Putsch in Munich in 1923. Before the trial, Hitler was only a minor, if ambitious, local party leader. Yet, once the proceedings began, his days of relative obscurity were over. Including never-before-published sources, this richly informed, day-by-day account shows how Hitler metamorphosed into a mesmerizing demagogue and used his trial as a stage for Nazi propaganda.

Chilling in the hypothetical questions it raises, The Trial of Adolf Hitler illuminates our understanding of Hitler's path to power.

Trial of Adolf Hitler: The Beer Hall Putsch and the Rise of Nazi Germany