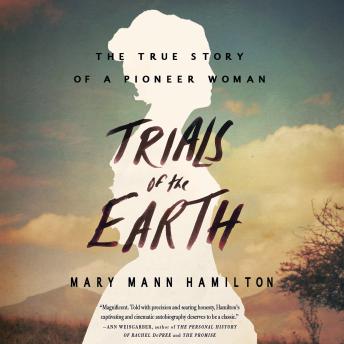 Trials of the Earth: The True Story of a Pioneer Woman

The astonishing first-person account of Mississippi pioneer woman struggling to survive, protect her family, and make a home in the early American South.

Near the end of her life, Mary Mann Hamilton (1866 - c.1936) began recording her experiences in the backwoods of the Mississippi Delta. The result is this astonishing first-person account of a pioneer woman who braved grueling work, profound tragedy, and a pitiless wilderness (she and her family faced floods, tornadoes, fires, bears, panthers, and snakes) to protect her home in the early American South.

An early draft of Trials of the Earth was submitted to a writers' competition sponsored by Little, Brown in 1933. It didn't win, and we almost lost the chance to bring this raw, vivid narrative to readers. Eighty-three years later, in partnership with Mary Mann Hamilton's descendants, we're proud to share this irreplaceable piece of American history. Written in spare, rich prose, Trials of the Earth is a precious record of one woman's extraordinary endurance and courage that will resonate with readers of history and fiction alike.

Trials of the Earth: The True Story of a Pioneer Woman