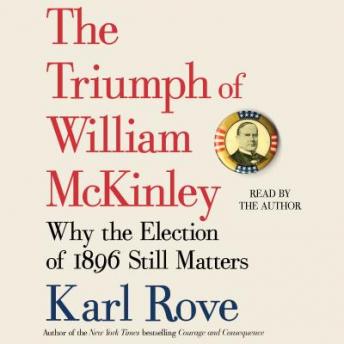 The Triumph of William McKinley: Why the Election of 1896 Still Matters

The 1896 political environment resembles that of today: an electorate being transformed by a growing immigrant population, an uncertain economy disrupted by new technologies, growing income inequality, and basic political questions the two parties could not resolve. McKinley’s winning presidential campaign addressed these challenges and reformed his party. With “a sure touch [and] professional eye” (The Washington Post), Rove tells the story of the 1896 election and shows why McKinley won, creating a governing majority that dominated American politics for the next thirty-six years.

McKinley, a Civil War hero, changed the arc of American history by running the first truly modern presidential campaign. Knowing his party needed to expand its base to win, he reached out to diverse ethnic groups, seeking the endorsement of Catholic leaders and advocating for black voting rights. Running on the slogan “The People Against the Bosses,” McKinley also took on the machine men who dominated his own party. He deployed campaign tactics still used today, including targeting voters with the best available technology. Above all, he offered bold, controversial answers to the nation’s most pressing problem—how to make a new, more global economy work for every American—and although this split his own party, he won the White House by sticking to his principles, defeating a champion of economic populism, William Jennings Bryan.

Rove “brings to life the drama of an electoral contest whose outcome seemed uncertain to the candidate and his handlers until the end” (The New York Times Book Review) in a “lively and…rigorous book” (The Wall Street Journal) that will delight students of American political history.

Triumph of William McKinley: Why the Election of 1896 Still Matters