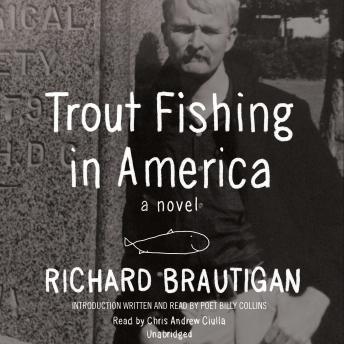 Trout Fishing in America: A Novel

In its first time in audio and with an introduction written and read by poet Billy Collins, Trout Fishing in America is an indescribable romp, by turns a hilarious, playful, and melancholy novel that wanders from San Francisco through America's culture.

Richard Brautigan's world is one of gentle magic and marvelous laughter, of the incredibly beautiful and the beautifully incredible. Trout Fishing in America is a pseudonym for the miraculous. A journey which begins at the foot of the Benjamin Franklin statue in San Francisco's Washington Square, which wanders through the wonders of America's rural waterways, and which ends, inevitably, with mayonnaise. Funny, wild, and sweet, Trout Fishing in America is an incomparable guidebook to the delights of exploration-both of land and mind.

Richard Brautigan was a literary idol of the 1960s and 1970s whose comic genius and iconoclastic vision of American life caught the imagination of young people everywhere. His early books became required reading for the hip generation, and on its publication, Trout Fishing in America, considered by many as his best novel, became an international bestseller.With it Brautigan caught the public's attention and became a cult hero. By 1970 Trout Fishing in America had become the namesake of a commune, a free school, an underground newspaper, and more. "There are a number of creek fishing sequences in this book which read as if Henry Miller had decided to learn about fishing from Hemingway but which will not likely amuse fisherman...The effect is more like that of a collection of newspaper columns...At times Brautigan can achieve absurdity which is Homeric...This book ought to be required reading in hippie pads."-Los Angeles Free Press

Trout Fishing in America: A Novel