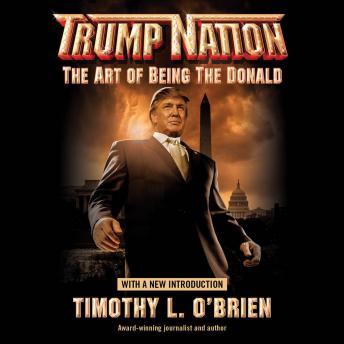 TrumpNation: The Art of Being The Donald

Available for the first time in a decade-the book that launched a $5 billion lawsuit--with a new introduction by the author in which O'Brien reflects on the recent wave of TrumpMania.

This entertaining look inside the world of Donald Trump is chock full of rip-roaring anecdotes, jaw-dropping quotes, and rigorous research into the business deals, political antics, curious relationships, and complex background of the leading Republican presidential candidate.

The world of Donald Trump is seemingly full of glitz and glamour. Yet despite glaring cracks in the shimmering fa?àövüade, the myth of the man has remained impenetrable to a fascinated public. Through interviews with Trump's closest friends-and with Trump himself-award-winning journalist and author Timothy L. O'Brien presents a look inside the life of one of the world's most famous businessmen, pulling back the curtain on the wizard of hype known as The Donald. Prepare to enter...

This 'myth-busting biography' (Kirkus Reviews) is the only argument you need against making America a TrumpNation, providing all the necessary details to 'separate Trump the reality from Trump the reality show' (USA Today.)

TrumpNation: The Art of Being The Donald