Trump's Island: A Gilligan's Island Parody for Adults Only 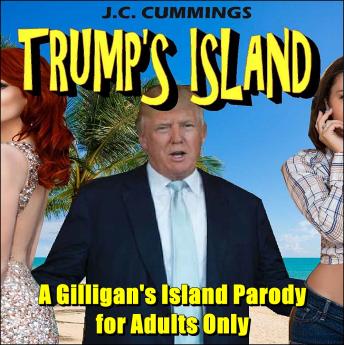 The year is 1969. The place--somewhere in the Pacific. Following a wild and sexy mishap aboard the Trump family yacht, 23-year-old Donald finds himself on a tropical island which just happens to be inhabited by seven stranded castaways! Among those castaways are two of the most lusted-after lovelies this side of Pago Pago--gorgeous movie star Gina LaPlante and farm girl extraordinaire Mary Lynn Saunders. Well, our future President is sure in a quandary! As much as he wants off the island to return to his life of wealth, a three-way roll in the palm fronds with buxom Gina and sweetly innocent Mary Lynn (who just happens to have, as Donald deems it, the World's Most Beautiful Ass) is even more compelling! This tall tale has it all: comedy, adventure, romance, tropical allure, a touch of drama, mind-blowing titillation, and, of course, the Donald J. Trump brand of bawdy sexual comings and goings. Whether you are a fan of 60s television parodies or present day political satire, travel to a place where the TV cameras of yesteryear, or any year, were never allowed to go!

Trump's Island: A Gilligan's Island Parody for Adults Only