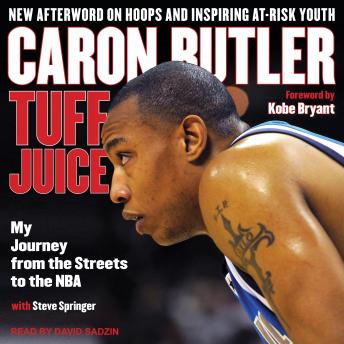 Tuff Juice: My Journey from the Streets to the NBA

Two-time All-Star and thirteen-year NBA veteran Caron Butler has an impressive basketball record. He was Big East Co-Player of the Year at UConn, the 10th overall pick of the 2002 NBA Draft and a key player for the Dallas Mavericks in their championship-winning season in 2011.

But before Butler had a chance to prove himself on the court, he spent his time trying to prove himself on the streets, as a gang member and drug dealer in his hometown of Racine, Wisconsin. He saw friends gunned down in the bloody street wars near his home, was arrested nearly 15 times and wound up behind bars and in solitary confinement before his 15th birthday.

Tuff Juice shares Caron Butler's extraordinary journey from his delinquent youth in the streets of Racine to his role as an accomplished pro basketball player, dedicated husband and father, active philanthropist and burgeoning businessman. Along the way, the book explores the incredible impact his single mother's unconditional love and his college coach's unwavering support had on him, and what drives him to be so successful in basketball and in life.

Tuff Juice: My Journey from the Streets to the NBA