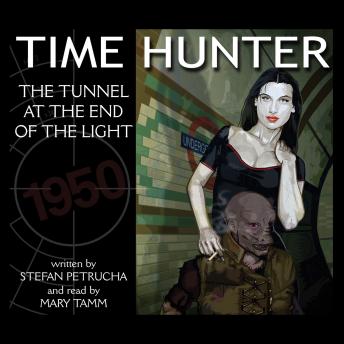 The Tunnel at the End of the Light

Synopsis: In the heart of post-war London, a bomb is discovered lodged at a disused station between Green Park and Hyde Park Corner. The bomb detonates, and as the dust clears, it becomes apparent that something has been awakened. Strange half-human creatures attack the workers at the site, hungrily searching for anything containing sugar . . . Meanwhile, Honoré and Emily are contacted by eccentric poet Randolph Crest, who believes himself to be the target of these subterranean creatures. The ensuing investigation brings Honoré and Emily up against a terrifying force from deep beneath the earth, and one which even with their combined powers, they may have trouble stopping.

ABOUT THE AUTHOR: Stefan Petrucha has been a professional writer of comics, novels and scripts for well over a decade. His first vampire novel, Dark Ages: Assamite is just being reprinted, having attracted rave reviews and quickly selling out its first print run. Petrucha is the writer and creator of such comic book characters as Squalor, Meta-4, Counterparts and The Bandy Man.  He has also scripted over a hundred comic book adventures for Mickey Mouse and Donald Duck for Egmont Publishing in Denmark, which have been published in more than thirty-five languages. He currently writes dark fantasy novels for White Wolf Publishing and comic books for Moonstone Books and his latest comic, Kolchak: Devil in the Details, is already being hailed as a classic in the series. www.petrucha.com ABOUT THE READER: Mary Tamm graduated from RADA, and made her television debut in the series The Donati Conspracy. Her early television credits include Coronation Street, Public Eye and Return Of The Saint, and on film she appeared in The Likely Lads and The Odessa File, before being cast as the icy Time Lady companion Romana, opposite Tom Baker, in Doctor Who. Since leaving the show Tamm's career has continued to flourish on stage and screen, encompassing such productions as Bergerac, Agatha Christie: Poirot, Heartbeat, Holby City, Jonathan Creek, Wire In The Blood and regular parts in both Brookside (as Penny Crosbie) and the BBC drama Paradise Heights. In 2009 the film Doghouse was released in which Mary stars alongside Danny Dyer and Noel Clark. www.marytamm.com.

Tunnel at the End of the Light