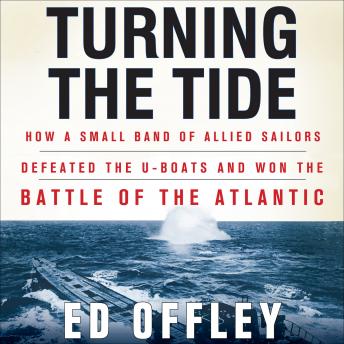 Turning the Tide: How a Small Band of Allied Sailors Defeated the U-Boats and Won the Battle of the Atlantic

The United States experienced its most harrowing military disaster of World War II not in 1941 at Pearl Harbor, but rather in the period from 1942 to 1943, in the frigid North Atlantic and American coastal waters from Newfoundland to the Caribbean. Nearly seven decades after the event, the Battle of the Atlantic still stands as the longest-running and most lethal clash of arms in naval history. During the entire duration of the conflict, more than 30,264 Allied merchant seamen and hundreds of navy personnel lost their lives.The strategic stakes in the Battle of the Atlantic were immense. If the Axis won, Great Britain could have been starved into submission, the Allies would have been unable to marshal their forces to liberate the Continent, and the Germans likely would have at least engineered a stalemate with the Soviets on the Eastern Front that would have allowed the Nazi regime to remain in power. In Turning the Tide, military reporter and author Ed Offley tells the story of how, during a twelve-week period during the spring of 1943, a handful of battle-hardened British, Canadian and American sailors turned the tide in the Atlantic. Using extensive documents from archives in Germany, Great Britain and the United States, and interviews with key survivors on both sides, Offley puts the reader into the heart of the battle-from the navigation bridges of British and American escort warships, to the main decks and engine rooms of Allied merchant ships in convoy, to the claustrophobic control rooms and wave-swept bridges of the U-boats stalking their prey. He also portrays the vicious bureaucratic struggles that raged behind closed doors at the headquarters of both the Allied and German military services, and the above-Top Secret Allied intelligence campaign to crack the German Naval Enigma codes. A thrilling tale of the decisive naval battle of World War II, Turning the Tide is also a harrowing story of how the Allies nearly lost-and ultimately regained-victory in both the Atlantic and in Europe itself.

Turning the Tide: How a Small Band of Allied Sailors Defeated the U-Boats and Won the Battle of the Atlantic