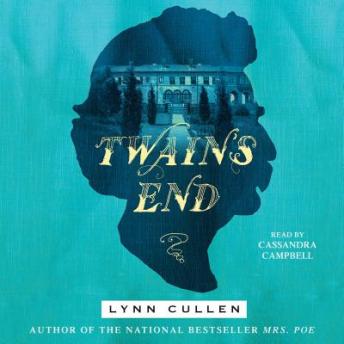 From the bestselling and highly acclaimed author of the “page-turning tale” (Library Journal, starred review) Mrs. Poe comes a fictionalized imagining of the personal life of America’s most iconic writer: Mark Twain.

In March of 1909, Mark Twain cheerfully blessed the wedding of his private secretary, Isabel V. Lyon, and his business manager, Ralph Ashcroft. One month later, he fired both. He proceeded to write a ferocious 429-page rant about the pair, calling Isabel “a liar, a forger, a thief, a hypocrite, a drunkard, a sneak, a humbug, a traitor, a conspirator, a filthy-minded and salacious slut pining for seduction.” Twain and his daughter, Clara Clemens, then slandered Isabel in the newspapers, erasing her nearly seven years of devoted service to their family. How did Lyon go from being the beloved secretary who ran Twain’s life to a woman he was determined to destroy?

In Twain’s End, Lynn Cullen “cleverly spins a mysterious, dark tale” (Booklist) about the tangled relationships between Twain, Lyon, and Ashcroft, as well as the little-known love triangle between Helen Keller, her teacher Anne Sullivan Macy, and Anne’s husband, John Macy, which comes to light during their visit to Twain’s Connecticut home in 1909. Add to the party a furious Clara Clemens, smarting from her own failed love affair, and carefully kept veneers shatter.

Based on Isabel Lyon’s extant diary, Twain’s writings, letters, photographs, and events in Twain’s boyhood that may have altered his ability to love, Twain’s End triumphs as “a tender evocation of a vain, complicated man’s twilight years and a last chance at love” (People).