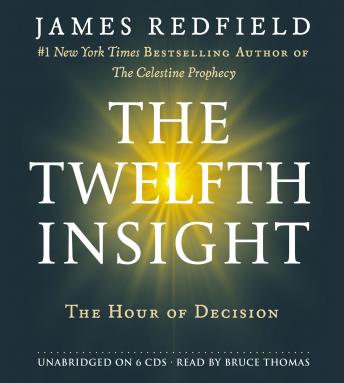 The Twelfth Insight: The Hour of Decision

On December 21, 2012, the Mayan calendar will end. Many see it as an apocalyptic sign.

In The Twelfth Insight, the long-awaited fourth audio book in the beloved Celestine Series, we again follow our Hero and his close friend Wil. They have just received a portion of another ancient and mysterious manuscript that describes a secret approach to spirituality that is silently arriving in the second decade of the 21st Century. But the manuscript is only available in fragments.

To understand its full meaning for mankind, our Hero and Wil begin an urgent search to find the message in its entirety. As they embrace the power of Synchronicity and begin their search, they are confronted by powerful political forces and religious extremists that stand in the way of these spiritual revelations.

Utilizing what he calls the 'parable effect,' and based on his own sources, James Redfield explores the similarities and differences that exist among the world religions, revealing the essential messages contained within them that can energize our experience of spirituality-- and produce a new wave of integrity and reform that can transform our lives and our world.

Twelfth Insight: The Hour of Decision