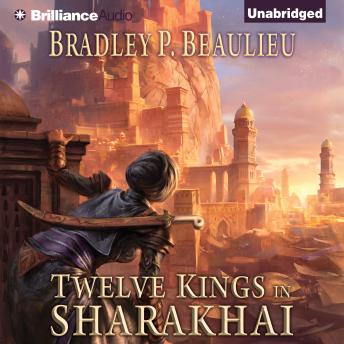 #1 of Song of Shattered Sands

The Song of the Shattered Sands: Book One

Sharakhai, the great city of the desert, center of commerce and culture, has been ruled from time immemorial by twelve kings -- cruel, ruthless, powerful, and immortal. With their army of Silver Spears, their elite company of Blade Maidens and their holy defenders, the terrifying asirim, the Kings uphold their positions as undisputed, invincible lords of the desert. There is no hope of freedom for any under their rule.

Or so it seems, until Çeda, a brave young woman from the west end slums, defies the Kings' laws by going outside on the holy night of Beht Zha'ir. What she learns that night sets her on a path that winds through both the terrible truths of the Kings' mysterious history and the hidden riddles of her own heritage. Together, these secrets could finally break the iron grip of the Kings' power...if the nigh-omnipotent Kings don't find her first.