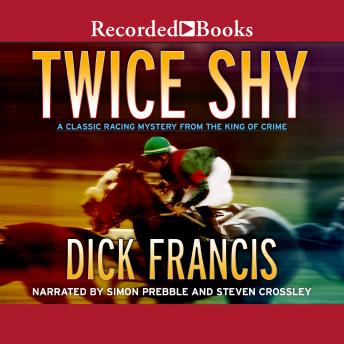 Dick Francis' witty blend of horseplay and mystery is an incredible combination. As a result, each of his equestrian novels gallops onto best-seller lists. In 'Twice Shy' Dick Francis whips up a fast-paced race through the risky world of horse betting. Offering little explanation, a friend thrusts some cassette tapes into Jonathan Derry's hands. But when the young man tries to play them, he realizes that instead of 'Oklahoma!', he's been given taped computer programs. Exploring the lines of code, Jonathan discovers that they can help him predict and beat any racing odds. Its not long before Jonathan is pulled into a deadly game of cat and mouse against foes who will do anything to get the lucrative programs. With unexpected twists, both in the races and on the tapes, Jonathan is soon dodging danger at every turn. As William, a savvy ex-jockey, comes to his aid, Twice Shy becomes an exciting dual narration that highlights each colorful character and moment of suspense.

This title is due for release on July 8, 2011
We'll send you an email as soon as it is available!