The Twilight of the Bombs: Recent Challenges, New Dangers, and the Prospects for a World Without Nuclear Weapons 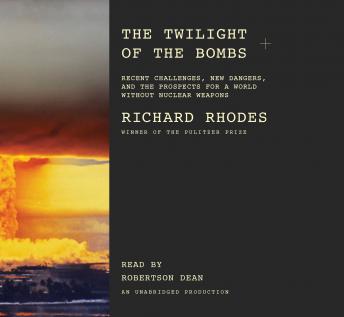 The culminating volume in Richard Rhodes’s monumental and prizewinning history of nuclear weapons, offering the first comprehensive narrative of the challenges faced in a post–Cold War age.

The past twenty years have transformed our relationship with nuclear weapons drastically. With extraordinary depth of knowledge and understanding, Rhodes makes clear how the five original nuclear powers—Russia, Great Britain, France, China, and especially the United States—have struggled with new realities. He shows us how the stage was set for a second tragic war when Iraq secretly destroyed its nuclear infrastructure and reveals the real reasons George W. Bush chose to fight a second war in Iraq. We see how the efforts of U.S. weapons labs laid the groundwork for nuclear consolidation in the former Soviet Union, how and why South Africa secretly built and then destroyed a small nuclear arsenal, and how Jimmy Carter’s private diplomacy prevented another Korean War.

We also see how the present day represents a nuclear turning point and what hope exists for our future. Rhodes assesses the emerging threat of nuclear terrorism and offers advice on how our complicated relationships with North Korea and South Asia should evolve. Finally, he imagines what a post-nuclear world might look like, suggesting what might make it possible.

Powerful and persuasive, The Twilight of the Bombs is an essential work of contemporary history.

Twilight of the Bombs: Recent Challenges, New Dangers, and the Prospects for a World Without Nuclear Weapons